The Coral (コーラル Kōraru) is a rather strange-looking new enemy introduced in Kid Icarus: Uprising. An oceanic monster, the Coral is one of the least aggressive Underworld foes that Pit will encounter, although it hides a dangerous ability.

As its simple name suggests, the Coral appears to be a floating mass of orange coral with nothing more than a pair of blue lips in terms of facial features. The branching coral on its head, as well as the two stubby leg-like structures beneath it are the only other notable features of this bizarre Underworld monster. What makes a Coral unique is that it is one of the few enemies in the game that doesn't appear to attack directly, at least not from a distance. The real danger lies in its ability to scatter the shards of its body over long distances when destroyed. Being hit with ranged attacks will make these shards fly towards the attacker, so the best way to dispose of these monsters is to destroy it with melee attacks. Doing so will cause the Coral shards to fly in the opposite direction, potentially hitting other enemies in the process. 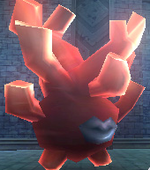 Corals are common enemies found in both air and land battles, first encountered in Magnus and the Dark Lord.

Upon maturation, these Underworld enemies explode, spraying deadly bits of rock over a wide area. Shoot them and these pieces will fly towards you, but melee them and they'll fly in the opposite direction.