Counter is a Power in Kid Icarus: Uprising. Counter can be used in Solo mode and Together mode. 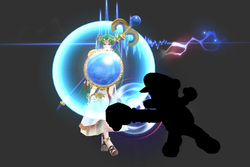 Counter in Super Smash Bros. for Wii U

When activated, the Power will automatically make the user counter any attacks, whether they be physical or a projectile. The user will not take any knockback from the attack, but will still take damage. Counter lasts for twenty-five seconds.

Counter also appears as one of Palutena's Down Special moves, being her default Down Special, in Super Smash Bros. for Nintendo 3DS and Wii U. When attacked, Palutena will attack back with her staff, dealing 1.3x the amount of damage of the countered attack. If she counters a strong enough attack, the move is capable of a one-hit KO. Counter returns in Super Smash Bros. Ultimate, remaining as Palutena's Down Special move, though now combined with Reflect Barrier. When attacked with a physical move, Palutena will use Counter, while she will use Reflect Barrier if attacked by a projectile.