Miks (ミック Mikku), originally written as Micks, are creatures of the Underworld Army. They are similar in shape to Monoeyes, but sport a large mouth lined with crooked teeth instead of an eye. They also have the extra ability to whip Pit with its tongue. According to the original Kid Icarus manual, they are relatives of Monoeyes.

The Mik is one of three enemies based on an exaggerated facial feature, the others being Monoeye and Specknose. In Mik's case, it is a large mouth and tongue. Miks have an "infinite appetite", capable of eating anything. They are able to devour prey larger than themselves and spend most of their time in the air hunting for any meat they can sink their teeth into. They can also use their long tongues to ensure that no potential meals can escape their grasp. Due to these qualities, Miks are quite literally flying stomachs with teeth. Yet, despite their constant hunger, they are very effective fighters in battle and can use their unique abilities against their enemies.

In the first Kid Icarus, Micks are common foes that fly down from above in a formation of four to attack Pit, acting similar to Monoeyes. They're only found in the Overworld and are easily dispatched.

Big brother to Monoeye. It flies around and gobbles up every kind of living creature with its enormous mouth. A real pig. 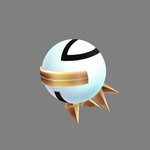 Miks return as common enemies in Kid Icarus: Uprising, now renamed. Like Monoeyes, they are able to spit out plasma-based projectiles at Pit. In addition, they gain the ability to attack with their long tongue.

Aurum Miks are fairly uncommon enemies, first found during the air battle of The Aurum Hive. They act identically to their Underworld counterparts.

Mik
Often deployed as the Underworld Army's advance guard, these floating mouths with whip-like tongues love to literally give their enemies a licking. They have an infinite appetite, and all attempts to put them on a diet have ended in tragedy.

Aurum Mik
An Aurum copy of the Underworld's Mik. With their obsession with copying everything, you'd think they would turn the tide of battle by mimicking the world's #1 warrior, Pit. Lucky for us, they'd have to catch him first to have a chance!

In Captain N: The Game Master, a Mick makes a short appearance in the episode "Mr. & Mrs. Mother Brain", having the same physical form as its game counterpart. It attempts to attack Pit while he was scaling Mount Icarus, but was quickly subdued by the angel.

In Super Smash Bros. for Nintendo 3DS, Mik appears as a trophy.

It's easy to sum up a Mik—it's a large- mouthed monster. It serves as one of the Underworld Army's frontline troops, but maybe it would make a better food tester? Miks will eat just about anything, you know, and angels are right at the top of the menu.