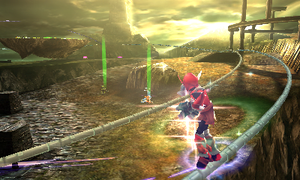 A battle at the Rail Temple

Rail Temple is the seventh stage normally encountered by Fighters in Together Mode of Kid Icarus: Uprising. This stage, littered with double Grind Rails, provides the perfect escape route for hit-and-run techniques. Rail Temple was used by Masahiro Sakurai to introduce the final work of Light vs. Dark. It is one of the four stages that must be unlocked.

This stage takes place in an eerie location with fog and tall ruins, as well as a large inaccessible stone tower in the background. This particular stage is notable in that it uses Grind Rails extensively, allowing players to easily and quickly get from one side of the area to the other. In addition, the rails come in pairs, opening up the possibility for players to battle each other along them. This is a quick and easy method for escaping and entering a battle. Two Grind Rail posts have additional rails leading to the center island afloat above. This is the place of refuge for angels in peril, however the open view on the island easily reveals their position. The island does not allow players to fall off it; rather it requires them to use the orange Jump Pad to exit. The rest of the field is relatively plain and leveled. Two other hideouts are also found beneath the Grind Rail posts. Gilded Bombs frequently appear here, ensuing extra protection for those in need of it.