From Icaruspedia, the high flying Kid Icarus Wiki
(Redirected from Together mode)
Jump to navigation Jump to search 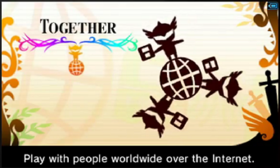 The Together Mode logo for Worldwide play.

The Together Mode in Kid Icarus: Uprising is a new feature to the series that allows six players to battle each other. The entire mode plays in the same way as the ground missions of the game, with the on-rails flight mechanics never being used during any part of a match. It was first introduced at E3 2011 and allows 3 on 3 battles using the same weapons that are featured in the single player campaign. Players play as Fighters equipped with a weapon and Powers chosen before the matches begin, and a Fighter can be replaced with either Pit or Dark Pit once certain requirements are met. Despite this being a multiplayer mode, all four modes can still be played by one player simply by creating a room or choosing the "With Anyone" mode. In "With Friends" or "Nearby" mode, the empty spots will be replaced by computer players. The number of Fighters defeated are represented by swords on the top right corner of the main Together Mode screen.

The game supports local and online multiplayer, allowing six people nearby or across the globe to battle each other in both random and friend matches. Uprising uses the Nintendo Network instead of Nintendo Wi-Fi Connection, the first official game in North America to do so.

When selecting "Nearby", players can only play with other people in close vicinity by creating rooms for them to join.

When selecting "Far Away", players can battle it out with friends or strangers all across the world. When playing with strangers, players will be sent to a random room with available slots.

This option only allows fights between friends registered on the Friend List while playing "Far Away".

This option only allows random strangers to join the fray while playing "Far Away".

There are two main modes of gameplay in Together Mode:

The rules of this mode are both unique and simple. All six players are divided into two teams: Light Team and Dark Team. Each team consists of three Fighters with separate health bars and each armed with a weapon of choice as well as their own Powers. In addition to the individual health bars, each team also has a life gauge that is depleted each time a team member is eliminated. The main goal of the game is to keep defeating the opposing team's Fighters until their life gauge is depleted. Once that occurs, the enemy team's last defeated member will spawn as either Pit or Dark Pit, depending on the team's color. At this point, the life gauge for that team will be used as the angel's health bar, and once again must be depleted for the other team to win. However, angels are much stronger in battle and have more health than the typical Fighter, making teamwork very necessary to beat the enemy. If a player other than the angel is defeated, the angel's health bar is depleted as a life gauge, however healing powers and items can restore the gauge as a life meter.

This mode has no teams and no angels, instead having different colored Fighters battle each other until the time limit is over. Who ever receives the highest overall score wins. Like team matches, players will be able to equip their weapon of choice as well as a number of Powers for use throughout the match. Some of the battlefields in Free-for-All are also considerably smaller than those of Light vs. Dark. This mode can be played with less than six people, although computerized characters will fill in the rest of the slots.

At the beginning of each match, all of the players will be able to choose amongst the weapons they have collected during the single player campaign. In addition, some well known items can also be found such as Food to replenish health. Finally, Powers can be used to heal oneself or execute powerful attacks against opponents. Exclusive weapons found only in Together mode are also included. Examples are Medusa Heads, Capture Circles and Chomp Traps.

The most notable weapon which is unique to this mode is Daybreak. It consists of three parts to be found: Daybreak A, B and C. Once combined, it unleashes a mighty blast that, if positioned correctly, will knock out foes in one hit. Players will hold on to the pieces until one player collects all three, but they can drop the pieces if they are defeated.

The value of one's weapon affects both game modes of multiplayer. In Light vs. Dark, the higher the value of the weapon, the greater the amount of a team's life gauge will drop. So in this instance, using powerful weapons in the battlefield isn't always necessarily the best strategy. In Free-for-All, the player that defeats a foe with a higher weapon value will receive less points for each fighter defeated compared to someone with a lower weapon value. However, players can defeat other Fighters more easily than one with a lower weapon value.

As in Solo Mode, each Fighter will also have a limited amount of stamina during battle. If a player runs for too long or uses too much energy (causing a sweat notification next to the heath bar as well as sweat indications from the character) when dashing, they will begin to slow down and then stumble while flashing red, making them unable to move or dodge. The power Tirelessness will prevent the user from losing Stamina for a duration of time.

After a battle has finished, players will be given a sum of hearts depending on how well they did. They may be even rewarded with Weapons, Powers, or Idols. The chances for better rewards increase if the player fights with more people and by fighting players registered on their friend list. Individuals that do very little during a match will not be rewarded much, regardless if their team won or not.

Together Mode features a number of stages for players to battle in. These stages are very different to what is experienced in Solo Mode. However, the flow of fighting remains the same, with some elements from Solo Mode being borrowed onto Together Mode, specifically Grind Rails, Jump Pads and music tracks such as the Land Battle music for Chapter 19: The Lightning Chariot being played on the stage Forgotten City. The following is a list of all Stages found in the game: