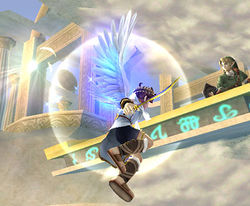 Wings of Icarus is Pit's up special move in Super Smash Bros. Brawl.

For the move, Pit's wings glow blue, and he can freely fly around the stage for approximately three seconds. If used straight from the ground, this move will give Pit a jumping boost.

The move is among the more capable up special moves in Super Smash Bros. Brawl in terms of recovery, as the height Pit can gain from this move is comparatively higher than the average. However, a downside of the move is that Pit is defenseless while the move is in action, and while Wings of Icarus can be canceled with an attack as a form of defense, if the move is halted in any way, Pit will not be able to use the move again until he has touched ground.

The move Wings of Icarus could be drawn from several points of origin;