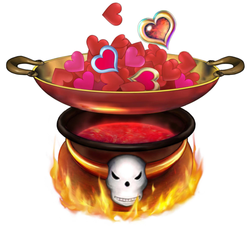 Official artwork of the Fiend's Cauldron.

The Fiend's Cauldron, known in Japan as Devil's Kettle (悪魔の釜 Akuma no Kama), is a system that lets players choose their stage difficulty by offering a certain amount of Hearts in Kid Icarus: Uprising. It appears at the start of every stage and the higher the intensity, the more enemies appear, the higher health they have, and the more aggressive they become. But on the other hand, higher intensities mean better rewards, such as more hearts and better weapons. The lowest intensity on the Fiend's Cauldron is 0.0 and the highest is 9.0. 2.0 is the standard difficulty and costs no hearts, while lowering or increasing the difficulty from 2.0 requires spending hearts. Retreating will make the player lose those hearts, and has a chance of "dropping" weapons the player achieves in the chapter.