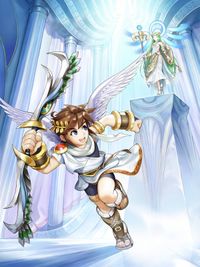 Welcome angel, to Skyworld, your new home! Here at Skyworld, the community gathers to talk about wiki matters, such as:

If you would like to start a new discussion, just make a new section under this line.

Remember to Frequently Wash Your Pit Behind the Ears

If you're looking for the old Skyworld discussions, they can be found at the Skyworld Archives. --Maxite 13:50, 4 October 2013 (MDT)

Besides Smash Bros, nothing major happened for the KI series (Even then, the over-generous amount of KI-related content Sakurai put in seemed to only put people off, Dark Pit in particular). Hoping Nintendo announces a new game sometime this year to increase hype and interest; would like more activity around this place, cause we can't really do any major changes around here when there are so few active users. —RicketyTrigger 09:54, 7 March 2015 (MST)

True, but it might be worth noting somewhere that Club Nintendo is shutting down, and that all three Kid Icarus games are available on it now. Come to think of it, I'm going to add that to the news on the main page. - Kirbman 22:37, 7 March 2015 (MST)

Since Sakurai said that he doesn't want to make a new game too quickly, I'd expect a gap of maybe three-to-five years. Hopefully something might come up at E3. Would definitely get some more activity under our belt. - Sonic fan 74 12:56, 8 March 2015 (MST)

Should SSB4 be considered canon?

After the whole thing about Dark Pit being part of the Forces of Nature, and some of the trophies mentioning things never stated in Uprising (e.g. Dark Pit Staff made by Mirror of Truth, Palutena's Temple seemingly confirmed to be the Palace in the Sky, etc.), had me thinking: should any of this be considered canon to the actual Kid Icarus series? I know Sakurai directed both games, but Smash Bros. is still its own creature. I want to lean some of it is canon since Sakurai is such a control freak when it comes to his own characters. But at the same time, the Palutena's Temple trophy claiming it appeared in the NES game seems a bit dubious, cause it doesn't outright confirm it is the original Palace in the Sky (and other trophy descriptions have made errors or overlooked facts before). Also, the term "Palace in the Sky" was used in the Zuree trophy. I have no idea who writes the trophy descriptions, and we don't know if Sakurai personally wrote the Palutena's Guidance script like he did with Uprising; so it seems wrong to just pick and choose what's canon without actually knowing. What do you guys think? —RicketyTrigger 19:05, 17 March 2015 (MDT)

I wouldn't consider Pit fighting Master Hand or anything like that canon, but I think it's safe to interpret the trophy descriptions as canon. - Kirbman 15:12, 20 March 2015 (MDT)

Hmmm... Maybe it's like PlayStation All Stars Battle Royal, where the characters start out in their own world, and go on some journey, fighting the other characters and at the end, fight Master Hand. That could work. In fact, that could be in the next Smash Bros! Excuse me, I've got some editing to do! Sonic fan 74 21:46, 20 March 2015 (MDT)

I'm obviously not talking about Smash Bros. as whole, but the Kid Icarus content exclusively, and whether all those things should be reflected as canon to the Kid Icarus franchise--things like the trophies and Palutena's Guidance. My thought is that Smash Bros. as a whole is not canon to any representative series in the games. BUT, because Sakurai worked on the games and Uprising, I'm wondering if Kid Icarus could be an exception. I personally think these things can all be taken in as canon but I don't know if everyone else agrees. Even if Sakurai didn't write the Guidance dialogue or trophies, I can guarantee he would have checked them over to see if it meets his approval and doesn't sway too far away from his expectations, which is why I believe they're all relevant to the Kid Icarus series. —RicketyTrigger 16:22, 20 March 2015 (MDT)

Wikipedia and many other NIWA wikis don't use these things, and I personally don't like them. How about anyone else around here? Do you guys like them, and should we keep them? -RicketyTrigger 19:16, 28 March 2015 (MDT)

Since Nintendo is letting people nominate the next DLC character for Super Smash Bros 4, I think we should have a poll that asks whether Magnus, Viridi, Medusa, or Hades would be the best new Kid Icarus character to come to Smash. - Kirbman 10:01, 2 April 2015 (MDT)

Sure I can do that later this day. I'll add a few more to the list. Although I personally don't expect another Kid Icarus character as DLC (it already has three, that's a lot for its size), but I guess it will be fun to do regardless. -RicketyTrigger 10:09, 2 April 2015 (MDT)

Um...not to sound like a Negative Nancy, but how would Magnus and Phosphora work as DLC characters? Both of them are already Assist Trophies in the game. It would be pretty weird to see them as both playable characters and Assist Trophies.PhantomHeartless5 11:55, 2 April 2015 (MDT)

You can simply remove them and add someone else in their place. For example if they want to make Magnus playable, they can add Gaol as an AT instead. It's really not that difficult of a solution. Theres no rule that characters that are Assist Trophies can't be upgraded playable status. Besides, I still see lots people voting for Ridley even though he's a boss AND Sakurai said he wouldn't work as a fighter. -RicketyTrigger 12:17, 2 April 2015 (MDT)

Well that would solve it I guess. I honestly don't know who to vote for though. I like all the Kid Icarus characters and any of them would be an awesome addition to the roster. Though judging by how the poll's going, it seems Viridi's the most popular choice. I'm surprised no one's voted for Hades yetPhantomHeartless5 12:41, 2 April 2015 (MDT)

Until I see a direct message by Sakurai that Assist Trophies absolutely cannot be made playable, I'm keeping Magnus and Phosphora on the poll. Personally, I'm not voting for any Kid Icarus character on the official ballot, despite the addition of Medusa or Hades being extremely awesome. I feel like four characters is overkill, even for a big Kid Icarus fan like me. I think the best option for now is to Luigify Dark Pit in a future update. -RicketyTrigger 14:34, 2 April 2015 (MDT)

I forgot that Magnus is an assist trophy, but I agree that he could always be upgraded and replaced. I'm surprised that 25 people voted before me. I guess we have a lot more viewers than editors. I'm actually not voting for a Kid Icarus character either, but I'd like to entertain the thought. My vote is going to Isaac from Golden Sun (with Felix and Matthew as alternate costumes). - Kirbman 00:22, 3 April 2015 (MDT)

I just looked at the results, and wow, I'm surprised with the sudden surge of votes for Medusa, in fact, she's leading it currently. I'm kinda shocked by how low Hades has, he's doing just barely better than Magnus. I guess it is important to note I don't have IP restrictions for this poll (I'm not premium), so the same person CAN vote repeatedly after a passing number of hours. So, I hope these results weren't contaminated by spam voters. -RicketyTrigger 16:25, 19 April 2015 (MDT)

Another home page suggestion, I think we should pick a new featured article. Magnus has been featured for over a year and a half. Looking at the nominations, I think we should feature the Reaper & Reapette article. It's a well written article, and I it's currently relevant, with their recent appearances in NES Remix 2 and Super Smash Bros 4. What do you think? - Kirbman 00:46, 3 April 2015 (MDT)

Hades and Thanatos are pretty good as well, but I guess they're slightly less relevant than the Reaper. -RicketyTrigger 02:41, 3 April 2015 (MDT)

My concern about putting Hades on the main page is that it would be a major spoiler for anyone who hasn't gotten very far in Uprising. (Side note, one of my friends is currently on chapter 9.) Thanatos is another good one, but I think it might be nice to put the spotlight on something other than a main character. - Kirbman 16:01, 3 April 2015 (MDT)

I'm having second thoughts about the Reaper article. Most of the article keeps saying "the reaper" as if there's only one. There are a few other minor problems that I'm fixing now. Maybe we should pick a different article for now. I don't see any problems with the Thanatos article, if you want to feature that instead. What are your thoughts? - Kirbman 22:05, 6 April 2015 (MDT)

Thanks! Think we should update the featured image too? It's been featured for just as long as Magnus. If so, my suggestion is this. - Kirbman 14:47, 8 April 2015 (MDT)

I remember in an old Skyworld discussion a user mentioned we should make those icon button things for SSB4 since KI is a big part of it, but I personally don't know how to make one that looks like the one in the front page (at least the yellow border part). Anyone know how to make one? -RicketyTrigger 07:06, 8 April 2015 (MDT)

I made these three quite some time ago, but yeah as I said, not sure about how to do the border. I have two different versions with just Pit (it would be more consistent with the rest of the front page icons): File:SSB4_Button_Ver1.png, File:SSB4_Button_Ver2.png. And I have one with all three playable characters, but to be honest it doesn't look too great (at least not the one I made): File:SSB4_Button_Ver3.png. You don't have to use these exactly, they're more like examples. I personally however do prefer the second one. But of course, if you think you can make one way better than these, you can go on right ahead. -RicketyTrigger 13:06, 10 April 2015 (MDT)

The first one appears to best match the style of the other four. The image circles are actually 78x79, with a yellow outer glow and transparent background, and the final images are 90x91. I just created and uploaded the image and am now working on including it on the main page. - Kirbman 16:32, 10 April 2015 (MDT)

Looks great, I definitely prefer the ones with just Pit on them. Looks more uniform with the rest. -RicketyTrigger 18:16, 10 April 2015 (MDT)

I think we should get rid of Category:Protagonists. Only six pages are in it, half of which aren't really protagonists anyway. It doesn't serve much purpose, and Uprising blurs the lines between protagonists and antagonists quite a lot. Thoughts? - Kirbman 21:49, 12 April 2015 (MDT)

Huh, I didn't even realize it existed. But yeah, I would say Pit and maybe Palutena are the only true protagonists in the series. So, this category is pretty unnecessary. -RicketyTrigger 16:20, 13 April 2015 (MDT)

The site has been updated to MediaWiki 1.25. My apologies for the site being down for the past few weeks. I am aware that there might still be some bugs to quash, and that the old Icaruspedia skin is in need of updating. If you find any bugs or issues, let me know. Thank you! Maxite (talk) 19:10, 1 September 2015 (MDT)

Nice to see the site has been finally updated. At first I thought a virus hit the site! PhantomHeartless5 (talk) 20:21, 1 September 2015 (MDT)

I was wondering if the new Mario game counts as a 'Latest Appearance' for the Kid Icarus characters. RicketyTrigger (talk) 15:05, 12 September 2015 (MDT)

MediaWiki is out of date and the extension is either broken or nonexistent, so I was waiting for Maxite to update it. Buuuut it doesn't look like he's going to be active anytime soon, so I'll fix it tomorrow (late now and need to go to bed) and we can revert it back later if need be.