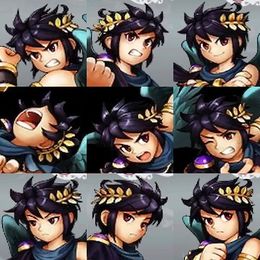 You can not look at this guy and not love him. Yes I just said that.

Hello yellow! I'm Sonic fan 74, a simple editor of Icaruspidia.I've played all three games and my favourite characters are: Dark Pit, Thanatos, Viridi, Magnus, Hades, the Chaos Kin, and the Aurum Brain (in that order), and I hope they all appear in the next game (except Hades), which WILL star Dark Pit! It pretty obvious.

Favourite Boss: Hades - When someone has an entire chapter devoted to them, you know they're good.

Favourite Chapter: Dark Pit/Scorched Feathers - WHY WASN'T DARK PIT A STAGE IN SSB4!!! I HAD TO MAKE IT MYSELF!!!

Primary Weapon: Dark Pit Staff - Call me cowardly but I just love seeing something get sent flying from a distance.

What I don't want

What I don't what

That's all for now. See Ya!

P.S1 If I do something stupid, sorry and please don't hesitate to correct me.

P.S2 I like to think that Hades is the secret main antagonist of the franchise. If you connect the dots it makes sense!