Magnus (マグナ Maguna) is a major supporting character introduced in Kid Icarus: Uprising. He is considered to be the mightiest human in the world, and is an experienced warrior that fights within a band of monster-fighting mercenaries. At first, Magnus expresses hostility toward Dark Lord Gaol, but it is later revealed that they used to work together before Gaol became corrupted by the Underworld Army. His first appearance is in Magnus and the Dark Lord as an ally.

Magnus has the appearance of a middle-aged, muscular, and gruff looking man. He is quite tall for a human, standing around 200 cm (6'7") [1]. Magnus has shoulder-length black hair, a beard stubble, and sandy yellow eyes. He wears a black shirt and pants with an orange undershirt beneath. His clothing is noticeably tattered likely due to his years of fighting against monsters. His right arm is wrapped partially in cloth, while his left arm is decorated with a notably large tattoo that extends all the way to his neck. Magnus wears a pair of strong boots that allow him to kick his enemies aside with little effort. In addition to these features, he also wears a sort of necklace made up of many different rocks and stones. The blade that Magnus uses is actually quite thick in addition to being sharp, yet he can swing it with great precision despite it being so bulky. The end of the sword's hilt is decorated with a curved piece of metal that matches the rest of the blade. In addition to his sword, Magnus also carries a small dagger stored in a scabbard attached to his shirt, although he has yet to be seen using it in battle.

Magnus can be described as being much more serious than Pit, but also has a habit of expressing sarcasm in certain situations. Sometimes, his sarcastic remarks are even taken seriously by Pit. For example, when the two characters first meet, Magnus says: "So you're here for a slice of the pie too." (referring to fighting Gaol) to which Pit responds "Huh? Pie? Where?" In addition, Magnus is also much more experienced in battle and knowing his enemies. While Pit may be quick to fall for traps set by the Underworld Army, Magnus can usually spot them beforehand. Magnus appears to do jobs that have a money reward, making him come off as selfish and greedy. However, it is possible the real reason he agreed to fight Gaol was to actually free her from the Underworld Army. Magnus also does not seem to very patient with Pit's sense of humor, especially when the latter is going on about his love of Hot Springs. 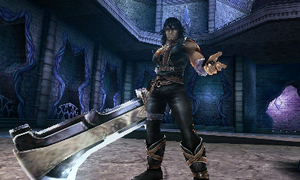 Magnus first appears in Magnus and the Dark Lord, the second chapter of Uprising. Pit is immediately surprised to see him fighting, and winning, against the Underworld Army in Dark Lord Gaol's castle and questions to Palutena as to whether Magnus really is a human or not. After introductions between the two, Magnus and Pit team up to fight through the rest of the Underworld Army and reach Gaol. Along the way, despite unknowingly and formerly impressing Palutena, Magnus accuses her of "not doing her job" and letting the Overworld fall into chaos. Palutena responds to Pit defensively, saying that "[She] take[s] it back. He's a jerk." Later, Pit comes across a treasure chest outside and Magnus warns him that it must be a trap, a warning that Pit fails to heed and the two are caught up in defeating a wave of monsters. Some time later, the two reach Gaol and Palutena guesses that Magnus and Gaol were part of the same mercenary group for a time, but Gaol's weak heart made "him" give into the Underworld Army. Palutena also reveals that Magnus lost his child to the Underworld Army. To Pit's shock, Gaol turns out to be a human woman and Magnus apologizes that he had to resort to such measures, but Palutena extracts Pit before he could learn or do anything more.

Magnus appears prominently again in The Ring of Chaos, set three years after the incident with Gaol while Pit is controlling a dog to run around a human town on the surface and find out why he had become a ring in the first place. The angel finds Magnus and begs the human to take the ring, despite the fact that Magnus cannot actually hear him. Magnus takes the ring, but tosses it quickly to Pit's dismay. However, Magnus returns after a moment and picks the ring up, then becomes playable for the remainder of the land battle as Pit takes control of the mercenary's body. Pit is shocked and confused by the current situation, and Magnus explains to an uninformed angel that Palutena had disappeared for a time before her army returned to the Overworld, only to fight against the humans. He was originally sent to take out Pit's Body, but eventually lets the angel use his body to fight off both the Underworld Army and the Centurion forces. The two eventually make it towards the edge of town to fight against the empty husk of the angel. Once Pit's Body is defeated, Magnus puts the ring on his finger and Pit regains control of his own body. After a momentary celebration, Pit's mood drops again as he starts questioning how he would return to Skyworld, and explains to Magnus the true nature of his flight—that it was all Palutena's doing. A few moments later, Pit is granted the Power of Flight and he leaves Magnus behind to head back to Skyworld.

Magnus appears briefly in The Three Trials alongside Gaol as a part of a boss fight, apparently having been invited by Dyntos to test Pit's strength and skill so the angel could obtain the Great Sacred Treasure. Both Magnus and Gaol seem to only be there for that purpose, and remain good-natured about the fight, with Magnus even offering a bit of his own kind of praise to Pit when the latter defeats him.

As a playable character, Magnus is only capable of melee attacks with his massive sword and doing a dash kick attack. However, his attacks are much stronger than most of Pit's melee attacks, and he can make quick work of both the Underworld forces and the Centurions.

Magnus
The mightiest human swordsman of all time. With his massive blade and experience as a mercenary, Magnus is a powerful ally against the Underworld. But his hard exterior masks what seems to be the tragic loss of a child.

Magnus & Gaol
Years ago, Magnus and Gaol were friendly rivals, often working together as mercenaries, each competing to steal the other's glory. Dyntos gives them a chance to fight together again, testing Pit on his way to battle Hades.

Magnus appears as a regular trophy and an Assist Trophy in both Super Smash Bros. for Nintendo 3DS and Wii U. He attacks by jumping around and swinging his sword at the enemies of the player that summoned him. He is however vulnerable to attacks and can be defeated if he takes too much damage. He also appears in the Wii U-exclusive mode, Smash Tour, as an item that causes all the players that were KO'd in the last fight to get launched.

Fred Tatasciore, who portrayed Magnus in Uprising was replaced by Patrick Seitz in this game. Meanwhile, the Japanese version of the game uses recycled voice clips of Kenji Nomura from Uprising.

NA Version: Magnus is perhaps the mightiest human warrior, and he has weathered countless battles. He seems to prefer working alone, and he can respect the strengths of foes like Dark Lord Gaol. However, he seems reluctant—not afraid—to fight Gaol. Is there a connection between these two?

PAL Version: With many years of battlefield experience and a tongue just as sharp as his sword, Magnus is an incredible warrior. Nightmares of his past have led him to become a bit of a lone wolf, but when he clashes with Dark Lord Gaol, it's clear there used to be a strong connection between the two.

Magnus does not return as an Assist Trophy in Super Smash Bros. Ultimate, but he does appear as a Primary-type spirit.