Medusa (メデューサ Medyūsa) is the goddess of darkness and reoccurring villainess of the Kid Icarus series. Prior to her banishment to the Underworld by Palutena due to her evil deeds against humanity, she co-ruled with the goddess of light.

Medusa before her transformation as seen in Medusa's Revenge

In the original Kid Icarus, Medusa is typically shown as a monstrous gorgon with scaly green skin, a single eye, and four snakes in her blonde hair. Before she was cursed by Palutena to take a form of a monster, the manual of the NES game states that Medusa was a beautiful goddess. Also, the anime short, Medusa's Revenge, depicts her before her transformation as a relatively attractive-looking young woman with pale skin and long black hair.

Her greatly revamped look in Kid Icarus: Uprising gave her a much more human-like appearance while retaining some of her gorgon features such as snakes on her hair and scaly hands. Her hair contains a dozen snakes, eleven of which are green, and a single orange-colored one. Medusa has ghostly white skin, long black hair instead of the previous blonde, and a black tattoo running down her left eye. Her dress seems to be made from dark purple velvet with gold and crimson decorations. Her dress is also very long, making her legs and feet not visible. She wears numerous gold accessories and ornaments to give off a regal look to fit her title as queen. Medusa is usually seen wielding a violet serpentine staff that seems to resemble the Ouroboros or the Caduceus.

During the final battle with her in Uprising, Medusa is forced to utilize her full strength to defeat Pit. She removes the spell that conceals her face in a mask of beauty, forcing her to reveal her true monstrous form. Her monstrous form is similar to the one from the first game, but is a floating disembodied head. Like before, Medusa has scaly green skin, a single red eye, and two tongues. The snakes in her hair become orange.

Medusa is a goddess with a very sinister and wicked heart. She has a strong hatred of humans and desires to see them suffer. Medusa is very sadistic, shown by her love for killing humans and tendency to add gruesome details whenever she makes colorful threats. Medusa openly claims to Pit and Palutena that there is no better way to celebrate her return than by starting a bloodbath. She also claims to Pit that she will tear off his wings to sever him from the heavens forever.

She is a vengeful deity that does not go down lightly and will hold life-long grudges to those that oppose her. Her entire motivation in the game stems from her seething hatred for Pit and Palutena. She blames the goddess of light for turning her into a monster and banishing her from Skyworld. As such, she takes every opportunity to mock Palutena, such as where she taunts the goddess by stating that Dark Pit's power of flight lasts far longer than Palutena's. Her hatred for Palutena is so strong that it allowed Hades to revive her, albeit weaker than she was previously.

Medusa is also significantly much more serious compared to the other gods as she rarely ever jokes or breaks the fourth wall. She does however, seem to possess a barbed and twisted sense of humor, as she begins to laugh upon Dark Pit's attempts to destroy Pit. She doesn't appear to view her minions too highly either, as she expresses little to no remorse over the defeat of Twinbellows, Thanatos, and Pandora.

Despite all these nefarious traits, Medusa has been shown that she can be willing to help her own enemy in order to stop a common foe, though she states that she only did so to stop Hades from constantly reviving her.

Like Medusa from mythology, she is capable of turning others into stone by using her glare. However, Medusa's Revenge depicted her turning people into stone using magical bolts fired from her fingers. As the goddess of darkness, Medusa specializes in dark magic. As such, Medusa primarily makes use of it in battle. Medusa attacks with various dark magic blasts such as various eye beams, dark energy mines that float for a few seconds before exploding, energy barriers, and energy orbs that spawn multiple energy orbs. Medusa also uses her magic to create a mask of beauty and hide her true appearance. However, when forced to use her full strength, the disguise falters. In her true form, the snakes in her hair can fire energy blasts.

Medusa seems to have a preference to strictly teleport as a way to move around, instead of combining the ability with levitation like most gods do. She also seems to possess telekinesis, able to keep Pit away from her with a powerful gust of wind and bombard him with petrified Skuttlers. When not using any of her magical abilities, she can attack ferociously with her sharp claws or deliver a powerful punch.

She has some limited ability to read the minds of other as shown in Chapter 9 of Uprising. She states to have used Pit's and Hewdraw's memories to recreate parts of That Burning Town, albeit it wasn't too accurate. This also shows Medusa is capable of illusionary magic and can create things that are not really there.

Like Hades, Medusa appears to have the ability to manipulate souls and mold them into any shape or form, as soul-made copies of Twinbellows, Hewdraw, and Pandora can be found in her castle. However, this ability is far less powerful than Hades's, as she can only create copies of others rather than revive them fully. Also, the clones are imperfect, as Medusa couldn't make the Pandora clone talk. Like many of the other deities, she can create large astral projections of herself and communicate via telepathy.

Prior to the events of Kid Icarus, Medusa originally co-ruled Angel Land with Palutena. Whereas Palutena fostered the growth of humanity, Medusa hated them, and took enjoyment in drying up crops and petrifying the humans. As punishment, Palutena changed Medusa's form to a hideous cyclopic, snake-haired monster and banished her to the Underworld. Angered by this, Medusa vowed revenge to overthrow Palutena and retake her position in the Palace in the Sky. Medusa eventually gained the allegiance of the Underworld monsters and led an attack against Palutena's Army. After the ensuing war, Medusa successfully imprisoned Palutena, stole the Three Sacred Treasures, and turned all the Centurions to stone.

When Pit encounters Medusa in the Palace of the Sky, she has taken refuge in a large effigy of herself. Pit must dodge deadly rays and Tanatos snakes from her hair, all while attempting to hit her with Arrows of Light. By positioning himself just a little bit under eye-level, he can avoid the majority of her attacks easily. Once she's taken enough damage, the eye will disappear, revealing a crumpling Medusa. The Mirror Shield will block her eye beams, but only if the shield is up (when Pit's not firing). 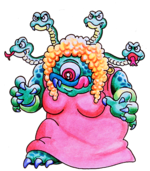 The big, evil gatekeeper who has occupied the Palace in the Sky. The goddess who was turned into a monster by Palutena, she does all she can to be evil and nasty.

Medusa makes a reappearance as the primary antagonist of the first main story arc. Her new design has a closer resemblance to her original sprite which is seen after she is defeated, rather than the boss form that Pit fought her in. However, she takes on a much more gothic look in contrast to Palutena's angelic appearance. Revived after her defeat in the first game, Medusa returns with her army, ready to attack the world and get her revenge on Pit and Palutena for her defeat twenty-five years prior.

During the beginning of Chapter 1, Medusa appears as an astral projection in the sky and greets Pit and Palutena by taunting them both. She reappears after Pit defeats Twinbellows, but only laughs at Pit's threat before retreating. Medusa later appears in Chapter 6, where she offers Dark Pit some help to defeat Pit, but he refuses the offer and desires no involvement with the Underworld Army whatsoever. The goddess of darkness doesn't appear to be too bothered, but rather amused as she watches the doppelgänger angel attempt to destroy his lighter twin.

Medusa makes her second to last appearance in Chapter 9, where she finally faces against her arch-nemesis. She greets the angel again via astral projection when he arrives in front of her castle. After mocking Pit, Medusa summons the Underworld Gatekeeper as a last line of defense, which is destroyed by Dark Pit. As Pit infiltrates deeper inside the castle, Medusa's anger begins to show as she accuses Palutena of being the evil one. However, Pit is quick to defend his goddess and blames Medusa for her own punishment while managing to question why she was revived in the first place. Medusa states that she does not remember and it doesn't matter because she is most importantly here to exact her revenge. After the small heated argument, Pit reaches the real Medusa in a final battle. As the fight continues, Medusa reveals her true monstrous form as seen in the original game as a last resort. After Medusa's defeat, her castle is shown crumbling away and the credits begin to roll. Pit and Palutena celebrate their victory, thinking they have defeated the final boss of the game, but shortly after Hades interrupts and reveals that he revived Medusa as a distraction.

Despite her destruction previously, Medusa makes a surprise final appearance in Chapter 25 during the true final boss battle against Hades, claiming that she was annoyed of being constantly revived by the Underworld god. She saves Pit from a powerful attack by decapitating Hades, only to be obliterated by Hades when he reforms his head.

Medusa (Battle)
The only comfort throughout Medusa's quarter century in exile was the thought of bloody retribution against Pit and Palutena. Now, facing the angel after all these years, Medusa's wrath is only matched by her fervor for revenge.

Medusa (Monster)
Long ago, Palutena cursed Medusa with this hideous form. Unable to face the monstrosity she had become, Medusa used her magic to maintain a mask of beauty - a face that falls when she's forced to put all her strength into defeating Pit.

Medusa vs. Hades
Spoiler alert: Medusa saves the day! Medusa's surviving spirit stops Hades before he can deliver the finishing blow to Pit. In her weakened state, she can't hold him off forever, but the goddess gets an A for vindictive tenacity.

Medusa (Rare)
Hades reconstructs Medusa from countless souls woven around a core of pure hatred for Palutena. Oblivious to the true cause of her resurrection, Medusa sets out to take revenge and conquer the three worlds completely. 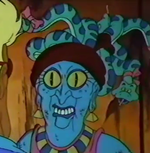 Medusa made an appearance in the Captain N: The Game Master episode "Mega Trouble for Megaland", where she was guarding the Three Sacred Treasures on Mount Icarus. Her design is a mix between her human and monster forms, and she has a beautiful voice to trick her victims into a false sense of safety. This ability worked on the easily fooled Simon Belmont, although Medusa was ultimately defeated by accidentally looking into the Mirror Shield and turning herself into stone.

Medusa and Pit in Medusa's Revenge

Medusa only appears once in the Kid Icarus 3D Anime, playing the role of the main character in her eponymous short, Medusa's Revenge. The animated feature depicts Medusa 25 years ago when she started to attack humanity and 25 years later when she becomes revived.

Medusa appears in NES Remix 2 as a boss just like in the original Kid Icarus.

Medusa is the goddess of darkness and the leader of the Underworld Army. Although she was defeated in the past, Hades has secretly resurrected her to fight again. Those slithering snakes on her head are really unpleasant. That's got to be the worst bad hair day ever.