Pandora (パンドーラ Pandōra) is the goddess of calamity, servant of Medusa, and a recurring boss in the Kid Icarus series. She is a conniving, ghost-like deity who prefers deception and trickery to brute force, although she's not afraid to attack directly if the situation calls for it.

Pandora was originally depicted as an amorphous, soap-bubble-like spirit with only the barest remnants of a face. Her eyes do not contain any irises and there seems to be no substance behind her ghostly facade. In Uprising, Pandora has a much more ghastly appearance, seeming to be made up of a ghostly blue fire. She also now has a set of sharp teeth and wears a halo-like object on top of her "head". 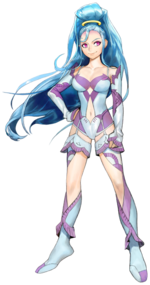 In her humanoid Amazon Pandora form, she appears as an attractive woman with long blue hair that form multiple ponytails with a gold ring at the top which was also present in her gaseous form. She wears revealing clothes which exposes her knees and thighs on the bottom. Her whole outfit is one suit which takes on the color of grey and purple, giving the old Pandora's chromatic scheme as well.

She is very easy-going and sarcastic, even towards her enemies, often speaking nonchalantly even during battle. As the goddess of calamity, she is very unpredictable and appears to be somewhat insane, often spouting random things and even building a driving course in her labyrinth to get her driver's license and taking yoga lessons despite that her most commonly used form has no limbs, something she herself is irritated about. She appears to be somewhat in denial when questioned about her insane quirks.

When she becomes Amazon Pandora, she becomes more arrogant and sassy. Throughout her battle in Scorched Feathers, she constantly tries to make Palutena and Viridi jealous of her beauty, the latter saying that Pandora is "trying to compensate for something" and "is still an evil blob in the inside, but with better hair". Despite her appearance change, she still has a sense of trickery, notably plaguing the battlefield with various traps and trying to trick Dark Pit by faking her own defeat.

With the title, goddess of calamity, Pandora is well-known for fooling others with her deceiving magic and tactics. She is able to create pocket dimensions that lead to her wild labyrinth filled with all sorts of visual trickery and elaborate illusions that can even stump the smartest of gods such as Palutena. Pandora's power also prevents Palutena from extracting Pit from battle until she's defeated.

When forced to fight directly in her spirit form, Pandora prefers to keep her distance, attacking enemies with fireballs and flaming discs, and spitting out bombs. She also has a vacuum ability, using it to inhale opponents close to her to inflict damage. Pandora can also teleport and sink into the ground to attack enemies from below.

Upon regaining her physical body due to the Rewind Spring, Pandora's powers increase dramatically. She is still capable of casting illusions, summoning Bombs, Trap Circles, and Pandora's Boxes to the field, but now gains several new powers. Pandora is now capable of levitation, flying through the air with incredible grace.

Many of Pandora's attacks in her new form are embellished with hearts, her main form of offense coming in the form of heart-shaped energy blasts. As a defensive measure, Pandora can create heart-shaped mirrors that can reflect ranged attacks back at opponents. Lastly, Pandora is shown to be a competent swordsman, capable of using her sword with deadly precision and can even fire crescent waves of energy from her blade. Despite her new powers, she's not above fighting dirty, faking her defeat to trick Dark Pit.

In the first Kid Icarus, Pandora is the Gatekeeper to Skyworld's Fortress and guardian of the Sacred Casket. Pandora is a ghostly face that cloaks herself as she floats throughout the battlefield, blowing bubbles at Pit. Pandora's attacks are quite damaging, but the deity is also quite slow. This can be a lengthy fight due to Pandora's ability to hide herself and stay out of range from Pit's arrows.

Centurions are very hard to keep alive in this fight and are almost not worth the effort, as Pandora can easily mow through a formation with ease. Instead, highly mobile hit-and-run tactics, something that the slow-moving Centurions don't do well, will win this fight. As Pandora fades in and out of the battlefield, a pair of bubbles will ricochet around the room, and trying to dodge both bubbles and Pandora herself is what makes this fight difficult.

The Gatekeeper of the Skyworld fortress. A demon god who administers all disasters. Blowing out bubbles, it has the power to warp when you least expect it.

Pandora returns in Kid Icarus: Uprising as one of the generals of the Underworld Army, where she has in her possession the Mirror of Truth, which can create duplicates of anyone who stares into it including monsters, thus aiding in increasing the number of troops for the army. In Chapter 5, Palutena sends out Pit to her secret lair which lies in a pocket of space. The base is a complex labyrinth of illusions and lies which proves to be quite difficult to traverse, filled with all manner of both dangerous and ridiculous obstacles that continue to change. Pit finally reaches her room where she is keeping the Mirror of Truth and challenges her to battle. She retains the ability to suddenly vanish then reappear to attack Pit, but also gains an inhaling ability and several fire based moves. Soon enough Pit knocks her down long enough to break the mirror, however this was the plan all along, as the minute Pit approached the mirror a duplicate had already been created from the dark half of his soul, Dark Pit. Unfortunately for Pandora, the dark angel refuses to take her orders and decides to team up with Pit to defeat her. However, the Dark Pit soon goes rogue and steals her powers, gaining his own version of the power of flight and flies off.

A soul-created doppelgänger of Pandora also appears in Chapter 9: Medusa's Final Battle, serving as one of the midbosses.

She later appears again in Scorched Feathers. She suddenly pops out of Dark Pit's wings and exploits the Rewind Spring to come back to life. She then starts attacking Dark Pit as revenge after being betrayed and exploiting her powers for flight. After she is "defeated" for the first time, she jumps into the Rewind Spring again and her appearance is changed into Amazon Pandora, her humanoid figure from long ago. After everyone is surprised by the change of events, she then starts attacking Dark Pit again for the second time. Amazon Pandora primarily attacks with heart projectiles and bombs, with the former paralyzing Dark Pit if hit. Pandora will also constantly teleport through out the match, making it harder to hit her. She also sets up many traps around the battlefield to cripple the dark angel, including several Pandora's Boxes and Capture Circles. At one point, she will pretend to have been defeated and then release an spread shot of hearts. She may also use her sword for melee attacks if the angel comes too close. Dark Pit eventually defeats Amazon Pandora once and for all, but also loses his ability of flight by doing so.

Pandora
As the goddess of disaster and calamity, Pandora built the Labyrinth of Deceit, where she's thought to be using the Mirror of Truth to create Underworld troops. Though she sounds jaded, it's just an act, for she delights in trickery.

Amazon Pandora
Pandora's original form. Beautiful yet mighty, she was one of the best warriors in the Underworld. Yet a blunder cost the goddess her body, forcing Pandora to take the form of a pure manifestation of her will.

Pandora appears as a boss in the Kid Icarus challenge of NES Remix 2.