Kerons are angel-sized, with prominent beaks, a pair of bird-like wings, and like so many other creatures in Angel Land, only have one eye. These creatures, although amphibious in nature, rarely spend their time in water despite having the ability to swim (as seen in Uprising). The wings that these monsters have are similar in appearance and size to those of a Shemum. However, unlike their reptilian comrades, the wings of a Keron are not vestigial and can actually be used for flight, even though it is limited due to the creature's body weight. Rather, Kerons are much more well-known for their large legs, which they can use to make powerful jumps. This exceptional hopping ability is also powered by the flapping of their wings, giving them an extra boost to reach great heights. In addition, Kerons are capable of shooting projectiles like most other Underworld enemies, although they travel in a unique and erratic twirling motion. During the rein of Orcos, these monsters evolved into smaller beasts resembling grasshoppers rather than frogs, although they still retained their jumping ability.

Kerons are common enemies encountered in the Overworld. They appear in groups of four and attack by jumping toward Pit. Kerons are capable of jumping through walls and platforms, and will turn around if they miss their target.

A frog that was given wings by Medusa. It's a strong jumper and quickly flies at enemies. 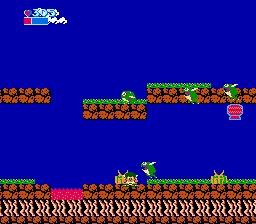 A variant, known as the "Cyclops Hopper", roams the Overworld in packs of four. These vicious predators try to hunt Pit down.

Kerons return in this adventure and are among the first enemies that Pit will encounter, introduced during The Return of Palutena. While they prefer to stay on land, Kerons won't hesitate to jump and glide after Pit as he is flying. At ground level, they will hop in place and can be dispatched rather quickly, although it can perform a spinning charge attack if threatened. In addition, Kerons are also capable of launching a fast spiraling projectile whenever they jump into the air.

This winged, one-eyed frog uses its wings to make up for the fact that it can't jump that well. Despite its laziness, Keron's surprisingly nimble spin attack and large, durable body make it a formidable foe.