Fire Wyrms, known in Japan as Hell Dragon (ヘルドラゴン, Heru Doragon), are large enemies that appear in Kid Icarus: Uprising . They are similar to the Fire Serpent. It is one of the rarest enemies in the game. Fire Wyrms are first encountered in a cavern within Gaol's Castle in Chapter 2, and appear later in Chapter 4 and Chapter 10.

The Fire Wyrm is one of the larger monsters encountered in the game. It resembles a skeletal serpent with a human-like skull and two fangs. They also have two pairs of wings along their body, with the pair closest to their head being larger. Parts of their skeletal structure also produce fire, including its wings, spine, and head. Fire Wyrms do not attack and act as obstacles. They can often be found floating lazily through the air, passing over Pit on occasion. At other times, the Fire Wyrm might slither along the ground very quickly to try and ram him with its head. Fire Wyrm's remaining health can be determined by the number of segments left on its body, with the head being the last. 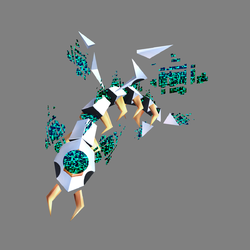 Fire Wyrms are semi-common enemies found in both land and sky battles, first encountered in Chapter 2: Magnus and the Dark Lord.

Aurum Fire Wyrms are fairly uncommon enemies, first found during the air battle of The Aurum Hive. They are one of the few monsters to be copied by the Aurum and act identically to their Underworld counterparts.

Fire Wyrm
A giant skeletal dragon said to reside in the fiery seas of the Underworld. The Fire Wyrm's feared even among Underworld forces. Its flames are fuelled by the jealousy and rage of others, guaranteeing it will survive as long as humans do.

Aurum Fire Wryn
An Aurum copy of the Underworld's Fire Wyrm. While they may not look the same, the replica really nail's the original's massive size! If a Fire Wyrm and an Aurum Fire Wyrm got into a fight, the real winner would be good times.