Handoras (ハンドラー Handorā) are new enemies introduced in Kid Icarus: Uprising. These monsters are both fast and strong, making them effective troops in the Underworld Army. 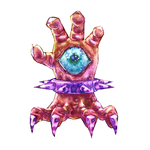 The Handora is a ghastly creature that seems to resemble a pair of disembodied monster hands fused together. One hand makes up the body of the creature and wears a spiked collar, while the second hand composes the head of the beast. The four fingers of the lower hand are extremely powerful, allowing the monster to move faster than any other Underworld foe. In fact, the Handora is capable of such speed that it can keep up with the likes of Pit even when he is flying. Meanwhile, the palm of the upper hand contains its bright red eye, which it can use to launch quick projectiles at its targets. Being composed of these two hands also makes this monster a very effective melee fighter. The Handora can use its lower hand to launch itself quite far while it clenches its upper hand into a fist to execute a powerful punch attack. This blend of close ranged and long ranged capabilities, along with its superb versatility, make this monster one of the Underworld’s most fearsome fighters. There is also a Cellular Handora, which acts much the same way, but is colored red with a blue eye and collar.

Handoras are common enemies found in both land and air battles, first appearing just outside the castle in Magnus and the Dark Lord.

Cellular Handoras (ハ細胞 Ha Saibou) are rare enemies found only during the land battle of Lord of the Underworld.

Handora
A pair of monstrous hands joined together and given a will of their own. Handoras crawl like spiders, even scrambling across walls and ceilings with ease. They are merciless hunters, their only motivation the desire to attack others.

Cellular Handora
This cellular version of the Underworld Handora guards Hades's Belly from intruders. Handoras are created by mass cloning the hands of other Underworld monsters. Naturally, being in a stomach, they have to wash often.