Syrens appear as enemies exclusive to the final level in the Palace in the Sky. They fly in from the right, in groups of two to four, and following a slight wave-like attack pattern.

The wicked creature of legend. If Pit is caught unaware by her beautiful female form she'll attack Pit with the steely claws on her feet.

Syrens return to this installment of the series, and they now have a much more colorful appearance and can attack Pit with whirlwind projectiles that can home in on his position. They are very common enemies, appearing in numerous chapters of the story. Oddly, Syrens also have been seen carrying other enemies on their backs, most notably during Magnus and the Dark Lord.

Long though the stuff of myths, Syrens are creatures that seem to combine the bodies of women with the limbs of birds. Their ability to fly and shoot whirlwinds from their open mouths sets them apart from all monsters and most gamers. 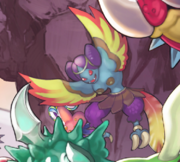 An illustration for Uprising showing a different design for the Syren where it appears to be topless like in the original NES game.
Retrieved from "https://www.kidicaruswiki.org/w/index.php?title=Syren&oldid=21006"
Categories: