The Igniot (ペトロン Petoron) is a new enemy introduced in Kid Icarus: Uprising. This monster seemingly functions as two unique parts that work together when attacking. 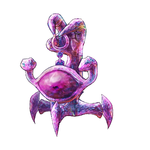 The Igniot is a very strange enemy that has an Egyptian look to it. Unlike most Underworld foes, this monster appears to actually be made up of two separate creatures that work together. One part of it is a hand with three fingers that ends in a base with three more fingers. The second part looks like a metallic amulet with a single large eye and two snake statues, which is attached to a chain that is held by the aforementioned hand creature. This eyeball is what the Igniot as a whole uses to attack with, as it is capable of firing a dangerous laser that can reach quite far and can petrify Pit on contact. However, it's not a mobile creature, so the Igniot will not be able to pursue Pit if he falls out of its view. There are also cellular versions, which are a shiny purple.

Igniots are uncommon enemies, found only in land battles. They first appear in Medusa's Final Battle.

Cellular Igniots (ペ細胞 Pe Saibou) are rare enemies found only during the land battle of Lord of the Underworld.

Igniot
A fearsome, rotating cannon that fires off petrifying beams of light. Its dangling eyeball keeps a constant vigil, mercilessly blasting any opposing forces that cross its path. Luckily, Palutena's protection ensures Pit is only briefly turned to stone.

Cellular Igniot
This cellular version of the Underworld Igniot guards Hades's Belly from intruders. They specialize in turning targets to stone with beams of light. A regular human hit with this attack could never hope to move again.