Commylooses (カイメルース Kaimerūsu) are cephalopod-like enemies that are commonly found out through the Kid Icarus series.

Commylooses resemble squids or octopi, having numerous tentacles and a soft, flexible body. They are nocturnal, having large yellow eyes that allow them to see in even the darkest Underworld caverns. Their tentacles are also very strong, allowing them to leap great distances to catch their prey from below. Although they are squid-like in nature, these creatures do not live underwater. Being known as King Krabs in Kid Icarus: Of Myths and Monsters, this class of Commyloose has a harder exoskeleton instead of a soft mantle, and possesses multiple crab-like legs instead of tentacles. 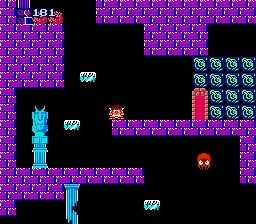 A Commyloose moving to attack Pit

These enemies leap up from below in groups of four. From there, they continue to jump around, hoping to hit Pit. Commylooses are commonly found in the Underworld and use pouncing tactics, of the climber sub-variety. They are relatively weak creatures, especially vulnerable to Protective Crystals.

A monster that lives deep in the earth. It has strong jumping power. It has eyes that can see in the dark and does not let those who enter its territory get away.

Commylooses are called "King Krabs" this time around. In addition, their appearance has been changed slightly to fit this name, resembling crabs rather than octopus-like creatures as they did in the past.

Appears from underneath to attack Pit when it finds him.

Commylooses return with a more squid-like appearance, and a new attacking strategy. This time around, they carry around bombs that can be tossed at Pit.

These squid-like enemies grow gigantic missiles that, once finished, are hurled with their tentacles. While these missiles are technically part of their bodies, Commyloose are eager to be rid of such potentially explosive weapons.