Dark Lord Gaol (魔王ガイナス Maou Gainasu "Demon King Gainas") is a minor antagonist introduced in Kid Icarus: Uprising. Initially believed to be a man under the armor, Gaol is revealed to actually be female early in the game. She has an appearance of a dark, knight-like character that speaks in an evil and distorted voice and serves as the boss of Magnus and the Dark Lord. She gives orders inside a dreary castle. Upon meeting Pit for the first time, Gaol doesn't seem to be intimidated by him at all, referring to him as "Palutena's little messenger boy."

Dark Lord Gaol wears knight-like armor over her entire body, to the point that only her green eyes are visible. She has a green aura radiating from her hands, and wears a large red cape. Her most notable features are the two massive horns that extend from her helmet. In addition, it appears that the pattern on her cape is made up of numerous eyes. 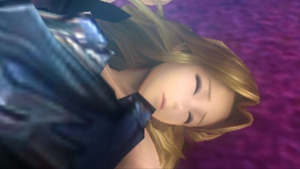 Gaol without her armor.

Without her armor, Gaol is revealed to be a beautiful young woman with brown hair. Although she's never fully seen, her true voice can be heard during The Three Trials. In terms of personality, Gaol is shown to be just as tough and determined as Magnus. She also fully supports Pit's assault against the Underworld Army, at least after the curse on her is broken during Chapter 2.

Without the armor, Gaol has no special powers of her own. Wearing the armor, however, gives her a wide array of powers. The armor allows Gaol to levitate in midair and grants her tremendous strength, allowing her to fight evenly with both Pit and Magnus, and send them flying with a spin of the cape. The cursed energy powering the armor allows Gaol to fire various blasts of dark energy from her hands and the horns on her helmet. The armor also comes with a voice filter to disguise her voice and identity. 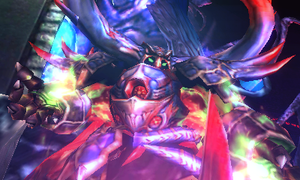 Dark Lord Gaol is first fought as a boss in Magnus and the Dark Lord, with Magnus helping Pit. During the conversation when the boss fight pursues, Palutena reveals that Gaol is a close friend of Magnus much to Pit's disbelief. After Gaol's defeat, it is also revealed that the Underworld commander is actually a human and female. Gaol is seen motionless but still breathing, indicating she is alive and well. Gaol is not seen again until The Three Trials, and she wears her cursed armor but her voice is back to normal (the curse seems to have uplifted from earlier). This time, she teams up with Magnus and fights Pit as a part of Dyntos's trial. After her second defeat, both Gaol and Magnus disappear from the scene and are never seen again during the game.

Dark Lord Gaol
A general of the Underworld Army who leads thousands of infernal troops on a violent crusade against the surface world. Gaol's armour emits cursed magical energy that gives the dark lord the ability to float in midair and fire magic missiles.

Gaol
Brave Gaol had once been a spy for the surface world, tasked with assessing the strength of the Underworld Army. Sadly, she was captured and forced to don the cursed armor of a dark lord, making her little more than a slave to evil.