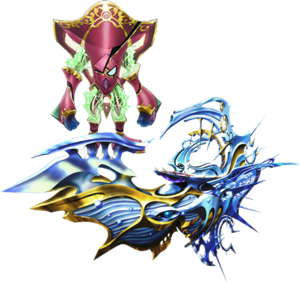 The Space Pirate Captain is the leader of the Space Pirates introduced in Kid Icarus: Uprising. He is an alien being that physically resembles his crew members and pilots the space-traversing Space Pirate Ship, and can be heard throughout the ship by way of the intercoms. The captain's role is minor; he appears only once, in the eighth chapter, The Space-Pirate Ship. Upon reaching him, he will blow his horn to call his minions, only to accidentally lure a Space Kraken to the ship, which promptly eats the captain and engages Pit as the chapter's boss.

The leader of the Space Pirates. Although weaker than his shipmates, the Captain—his true name impossible for human tongues to pronounce—somehow managed to take charge through sheer bossiness. Thus, he's not very popular.