Pyrrhon, known in Japan as Lars, the Sun God (太陽神ラーズ, Taiyō-shin rāzu), is a major character in Kid Icarus: Uprising. He is the (possible) sun god, and assists Pit in fighting off an alien invasion. He appears during the Aurum arc of the main story (Mysterious Invaders, The Aurum Hive, and The Aurum Brain) as an ally in the former two and a brainwashed antagonist in the latter. His primary method of offense is his ability to manipulate fire and use it to attack enemies and his ability to fly fast. He is depicted as a strong head superhero-like character with a large ego and surprising intelligence, although the latter two traits do conflict with each other sometimes when Pyrrhon talks. During the final battle, the Aurum Brain takes control of him and he becomes Aurum Pyrrhon.

Pyrrhon looks like a comic book superhero with a muscular build and a body engulfed in flames including his hair. He also has bright red skin covered with tattoo-like, glowing yellow lines. He stands around 230 cm (7'6") tall[1], if his rising flaming hair is excluded.

At first glance, Pyrrhon seems to be an affable and boisterous character. The sun god is quite eccentric, acting as if he is a superhero from a comic book. As a result, he is seen as a bit of an oddball by the other gods and no one seems to take him seriously. Pyrrhon is very egotistical, possibly the most narcissistic character in the game. He usually addresses himself in third-person and refers to the other deities as "godlings". Despite his odd quirks, Pyrrhon is very brave, always rushing into danger head-on. However, this also causes him to act reckless as shown in Chapter 16, where he inadvertently makes the Aurum Generator stronger with his firepower.

However, Chapter 17, reveals that his eccentric personality is merely a facade that masks a cruel and selfish egomaniac who will stop at nothing to achieve his ambitions. Pyrrhon is motivated solely by his ego, feeling that he is superior to all gods. He seeks to control the Aurum and become the strongest god in existence.

Despite his odd quirks, Pyrrhon is a cunning and manipulative being, as he managed to trick Pit and the other deities to reach his goal of controlling the Aurum Brain in his attempt to become a "Level Infinity Epic Super God Plus" and get the status he so richly desired. He also has immense knowledge of the Aurum, having studied them intensely. However, despite his intelligence and cunning, his mind appeared to be weak enough for the Aurum Brain to overwhelm him and turn him evil.

As the self-proclaimed Sun God, Pyrrhon holds power over fire and is shown to be very adept in its use. Pyrrhon's main form of offense comes in the form of tossing salvos of fireballs at his opponents, or what he calls his "Pyroblasters". His strongest attack comes in the form of his "Pyro Cannon", a large column of fire he shoots from his hands. Pyrrhon is also capable of molding fire into whatever shape he desires such as waves of fire, a serpentine trail of flame he dubs the "Pyro Snake", and mines that explode upon contact with enemies or after a few second delay. Pyrrhon is also capable of regulating his body temperature as shown at the end of Chapter 15, where he was able to safely carry Pit out of the Aurum Islands without fear of burning him. Pyrrhon is also capable of flight and teleportation.

Upon merging with the Aurum Brain, Pyrrhon's powers increase exponentially. Pyrrhon's merge now gives him control over every unit in the Aurum fleet, from the mighty battleship to the tiny foot solider. He can even amplify their strength with his fire powers. Like the other gods, Pyrrhon is capable of communicating through telepathy and can even block telepathic commands of other gods, shown when he prevents Palutena from extracting Pit during Chapter 17. Like other deities, he can also project his astral form. Though whether he had this ability before merging with the Aurum Brain is unknown. 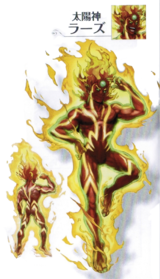 Pyrrhon makes his first appearance in the flight section of Mysterious Invaders as an ally of Pit to help defeat the Aurum. He explains to the angel and the "godlings" about the Aurum, and how these extraterrestrial beings must be stopped before they devour the entire planet. Despite his helpful knowledge about the Aurum, none of the other characters take him seriously, likely due to his over-the-top eccentric personality. After Pit annihilates the Aurum Core, Pyrrhon saves the angel from the explosion caused by the Core's destruction.

In the next chapter, Pyrrhon only makes an appearance at the end during the boss fight with the Aurum Generator. He attempts to help out Pit again by attacking the machine with his fire abilities but only makes the situation worse by overheating the Generator then flees.

In the last chapter of the Aurum invasion, Pyrrhon joins Pit and the other gods in the final battle to get rid of the aliens once and for all. He leads the angel into the Aurum Brain Fortress where the Aurum Brain resides and tells him to shoot at it. As Pit opens fire at the Brain, Pyrrhon suddenly then merges with it by entering the core. This action causes a destructive explosion, but Pit quickly manages to escape in time. Pyrrhon then appears as a large astral projection in front of Pit, and reveals he has been using the angel the entire time to take control of the Aurum in order to become a "Level Infinity Epic Super God...Plus!" and control the Aurum fleet to raise his rank as a deity. Pyrrhon's control causes the Aurum troops to change color into a bright red and become even more powerful. However, the Aurum Brain corrupts him and takes control of him instead and uses his powers to destroy Pit by interfering Palutena's ability to extract Pit when the Power of Flight was running out. As Pit continues his assault on the Aurum, Pyrrhon again attempts to get rid of him again by firing a powerful blast of fire, but the angel is luckily protected by the Forces of Nature blocking the attack for him. Once finally Pit reaches the Aurum Brain again, he discovers that Pyrrhon's mind has been completely consumed by the Aurum Brain itself, becoming Aurum Pyrrhon, which turns him into an emotionless and robot-like entity that can only speak in gibberish and binary. Pyrrhon then begins to viciously attack Pit and threatens to destroy the planet. After Pit defeats the brainwashed Pyrrhon, he returns to his senses and sends out a huge pillar of fire that launches the remaining Aurum back into space towards the other side of the galaxy, ending the Aurum threat once and for all; however, Pyrrhon's fate afterwards remains unknown. This action however was commented on by Viridi, with her saying, "He finally does something useful."

The self-proclaimed "Sun God" who is investigating—and entranced by—the wondrous and alien Aurum. Pyrrhon's massive ego seems inversely proportional to his intelligence, making his boasts of divine lineage a bit hard to swallow.

Pyrrhon appears as one of the numerous collectable trophies in Super Smash Bros. for Nintendo 3DS.

A savior from the annals of history! A comic-book hero come to life on the big screen! ...No one can tell if Pyrrhon is serious when he introduces himself. A self-proclaimed sun god, his obsession with the Aurum must be part of Pyrrhon Creed Number 851: know the baddies!