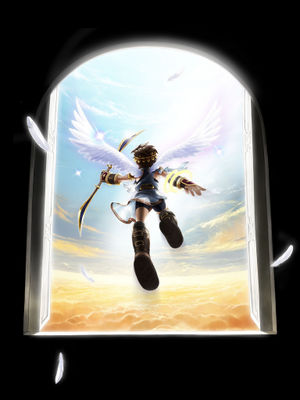 The Power of Flight granted on Pit's wings.

The Power of Flight (飛翔の奇跡 Hishō no Kiseki) is a new mechanic introduced in Kid Icarus: Uprising. It grants Pit the ability to fly for around five minutes. This power was given to Pit by Palutena, in order to help him reach key destinations for his missions. Besides flight, this power also boosts the strength and speed of Pit's attacks in air battles.

Although the Power of Flight appears to be very similar in function to the Wings of Pegasus and other related items, it actually has some major differences in the way it works. The primary difference is that this power is fueled constantly by Palutena, allowing her to completely control Pit's path and direction. To this effect, the Power of Flight acts as a sort of vessel to get Pit to his destinations, although he still has control over his aim and maneuverability. The other difference is the time limit of five minutes during which he can sustain flight. Because this power consumes so much energy, Pit can only stay airborne during this time limit before his wings burn up and falls. While Palutena is usually able to get Pit to ground level before the five minutes are up, some missions may impede this effort and stress the limits of flight. One example of this is in Heads of the Hewdraw, where Pit will be kept airborne under the time limit until he defeats Hewdraw.

The Power of Flight is Pit's new Up Special in Super Smash Bros. for Nintendo 3DS and Wii U, replacing the Wings of Icarus from Brawl. Pit briefly charges then launches himself in the direction the player chooses. The wings noticeably change from blue, yellow, then red, similar to how it does in Uprising when changing flight speed. The Power of Flight is also Dark Pit's up special, which functions exactly like Pit's but appears to be granted by Viridi. 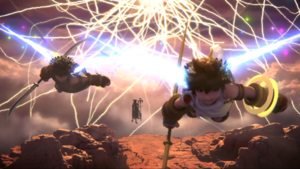 The Power of Flight granted on Pit and Dark Pit in the World of Light.

The Power of Flight is Pit and Dark Pit's Up Special in Ultimate. It functions almost identically as it did in the previous game.

In the opening cutscene for World of Light, Pit and Dark Pit can be observed attempting to escape Galeem's attack using the Power of Flight given by Palutena. However, the defeat of the goddess immediately causes the two angels to lose their flight then also be destroyed by the light beams.