Hewdraw (ヒュードラ Hyuudora) is a large, serpentine monster and recurring boss in the Kid Icarus series. It is proven to be one of Pit's largest foes and is very dangerous in battle. Over the years, it has undergone some of the most dramatic changes, gaining two additional heads as well as the ability to fly, breathe fire, and speak.

Hewdraw was once a single serpent that lived within a large pool of lava. It was light purple in coloration, had two webbed ears, and was armed with many sharp teeth in addition to a pair of larger fangs. Years later, Hewdraw grew into a much larger and stronger beast, now possessing a trio heads with unique personalities and qualities. Because of this dramatic change, the monster is like three distinct characters in one. 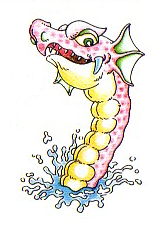 Hewdraw is the Gatekeeper of the Overworld's Fortress, guarding one of the Sacred Caskets. The combat area consists of platforms over a lake of lava, and Hewdraw's tactics consists of diving in and out of the lava, hoping to catch Pit in its jaws. It has no projectiles of its own, so as long as Pit can avoid physical contact, Hewdraw will fall pretty easily. This fight can be much easier with Centurions, since their arrows will stretch across the entire area. Pit must be careful with positioning these fellows, though, as a lunge from Hewdraw could easily knock out all three in one fell swoop. Preserving Centurions is very important in this fight; by carefully predicting Hewdraw's movements, Pit can guide the Centurions out of the way to minimize their loss. Trying to tackle Hewdraw alone can really drag this fight out, as Pit must get close to cause damage and Hewdraw is constantly moving and its head is the only vulnerable spot.

The Gatekeeper of the Overworld fortress. It suddenly lurches out of the water to attack Pit. Its body is like a smooth snake. It's a powerful enemy and difficult to defeat.

In Kid Icarus: Uprising, Hewdraw reappears as the boss of Heads of the Hewdraw, more inspired by the Hydra than before. Not only does it have three different heads, but each one seems to have a distinct personality and mindset. In addition, each head has a different voice, and they seem to argue with each other frequently. It is the first boss battle shown to begin at the start of a mission. It is also split up into three parts that occur at different sections of the mission.

The blue head of Hewdraw is seemingly the friendliest of the three, and will actually greet Pit with a cheerful "hello" on multiple occasions. Despite this, he still very much wants to eat the angel and will initially try to lure Pit into coming within his reach. The blue head also appears to be the calmest of the three, although he doesn't seem to care much for his brothers, considering them as nothing more than "deadweight". He is also a bit vain, as when he is defeated he will say that he is too pretty to die. His voice is also noticeably deeper compared to the other two heads. Under certain circumstances, the blue head will fall victim to one of Pit's puns at the end of the first Hewdraw battle.

The purple head of Hewdraw appears to be the most intelligent of the three, initially displaying a sense of self-respect. However, despite him being smarter, he also has the worst tendency to ignite arguments with his fellow heads. In addition, the purple head is shown to be a bit literal-minded when conversing with Pit before battle. His voice is higher pitched and almost identical to that of the violet head. Judging by the color of the rest of Hewdraw's body, the purple head likely has the most control over its entire being. Unlike other Underworld bosses, this Hewdraw head actually compliments Pit upon his defeat, even proclaiming that he has grown stronger since they first fought 25 years ago.

The violet head of Hewdraw seems to be the most impulsive and irritable of the three, focusing more on its hunger than the situation at hand. While he can get annoyed rather easily, this head does display more maturity than the other heads at times. This is shown when he tries to convince the others not to argue when they have company (Pit, in this case). Aside from these rare cases of decency, the violet head tends to yell and whine most of the time. His voice is higher pitched and almost identical to that of the purple head.

In Chapter 3 of Kid Icarus: Uprising, Hewdraw is split into three distinct boss battles at once. During the Air Battle of the mission, the full-bodied Three-Headed Hewdraw is fought. It consists of Pit cutting off each of the heads individually. Once all three are down, the whole body "explodes" and falls to the ground. If Pit doesn't manage to defeat all three heads in time, Palutena will use her Glam Blaster power and blast the monster, ending up with the same result[1]. While the last head is silenced forever, the other two escape to the town below.

Depending on which head is taken down second in the previous battle, Pit will confront it in an arena vaguely similar to that in Chapter 1. The Hewdraw Head is attracted to the angel's new scent thanks to Palutena's powers. With no body to support it, the head manages to attack by continuously hopping and charging at the player. It is unable to shoot any projectiles in this form. Once the final blow is given, the Hewdraw Head is left dead on the ground, soon disappearing after the event.

Once getting to the end of the town and out of the gate, Pit crosses a short pathway to the shore of the nearby lake. On arrival, the remaining survivor roars at his opponent, immediately getting into battle. The last Hewdraw head had retreated off into the lake where it quickly regenerated a body of its own, allowing it more powerful attacks and maneuverability. The toughest of the three battles, Hewdraw Reborn now uses fire and water balls as his basic attack. Once hit a few times, Reborn will enter the sea, swimming from left to right, shooting scale-like missiles in the process. While relatively weak, they are hard to dodge and come continuously, making these projectiles just as deadly. Mysteriously, while Reborn swims in the water, floating balls of orange energy appear on top, also moving from left to right. They do not harm Pit; in fact, when dropped into the water courtesy of ranged attacks, they throw Hewdraw right out, temporarily leaving him defenseless while Pit can melee him. The second time inside, Hewdraw will now also come up himself to fire a set of water based missiles which are extremely hard to miss. It will also begin to fire purple energy balls that break into smaller projectiles if fired upon. Precise dodging is the key. While a powerful attack, charging up for it takes time, letting the angel barrage it with ranged attacks. Once defeated, Hewdraw Reborn will utter his final words before he implodes and vanishes, leaving Pit victorious.

Three-Headed Hewdraw
An enormous three-headed flying dragon. Each of Hewdraw's heads has its own personality, causing them to constantly bicker and argue. Lucky from them, the heads can survive if ever separated from their body.

Hewdraw Head
After being severed from their shared body, Hewdraw's heads are free to go their own ways. One is dumber than the others, and Palutena is able to lure it with her pheromones, giving Pit a chance to slay it once and for all.

Hewdraw Reborn
Hewdraw's incredible regenerative ability allows its final head to regrow a new torso mere minutes after its decapitation. After resting by a lake to regain its strength, the beast later waits to take its revenge on Pit.

Hewdraw appeared in the Captain N: The Game Master episode "Mr. & Mrs Mother Brain" where it appears to be a rabbit-like snake. Curiously, it also has a shell on its back and it was flying even though it has no wings (Hewdraw wasn't flying previously, merely diving in and out of the acid lake, although it gains this ability in Uprising).

Hewdraw appears as a boss in the Kid Icarus challenge in NES Remix 2.

A dragon with three regenerating heads. Each head has its own unique personality, and they are not known for getting along. One head would want to destroy a wall, the second would go around it, and the third would fly over it. All three are plenty happy to devour a meddling angel, though.