Shulms (シュルム Shurumu) are fungi monsters that originated from the damp, dark caverns of the Underworld. These creatures are among the less threatening members of Underworld Army, although they can also be quite poisonous.

The Shulm is one of the slowest monsters of the Underworld, due to its disproportionately large head and small, stubby legs. Although its body looks like a mushroom, the head is actually a biological sack that contains hundreds of poisonous spores that can potentially cause fungal infections or temporarily poison its victims. Some of these spores have been known to sprout and grow on the head of the Shulm itself, making it a sort of host to its own defense mechanism. In early years, Shulms rarely used their poisonous capabilities, making them easy pickings for Pit's mighty Bow. However, since the revival of Medusa, they can now put their abilities to full use and release the spores within their bodies if struck hard enough with a projectile attack. 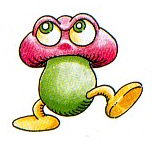 These mushroom-like foes are found in the Overworld's Fortress. They are slow, trudging enemies and are a minimal threat despite their relatively high durability. Despite what the manual claims, they cannot poison Pit in this game.

A really gloomy creature that lives in dark, wet places in the fortresses. It gives out really poisonous spores from its body and robs its enemies of lives.

Shulms can now explode and expel a poison cloud when hit with projectile attacks. Because of this, melee attacks or striking from very far away is necessary to defeat Shulms without taking damage; fortunately, this is easy to do, as they tend to waddle around aimlessly and ignore Pit unless attacked. Their explosive capabilities are similar to those of Minos but with poisoning effects.