The Monolith (モノリス Monorisu) are recurring inanimate enemies in the Kid Icarus series.

The Monolith is a flat, blue metal square with a lighter toned border in Kid Icarus. In Kid Icarus: Uprising, the monolith has a red border with engravings that form into a circle instead of just the blue square. Originally designed to be enchanted training devices, these mystical tablets were once extremely weak and could be broken apart by almost any weapon. Many years later however, Monoliths were seemingly cursed by the power of the Underworld, which engraved special markings into the material that composes them. Because of this, they are now larger than ever before and completely invulnerable to any and all forms of attack. Despite these new-found qualities, Monoliths still don’t display any form of intelligence and will usually follow a set path to block certain areas with their impervious mass. 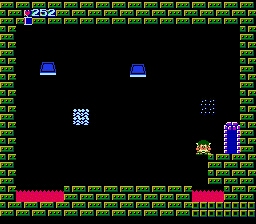 A chamber of Monoliths

Monoliths are used by Zeus to test Pit's mettle in a Sacred Training Chamber. A monolith is an iron plate that falls down, some at various diagonals, others at more extreme veering paths. These training tools can quickly swarm all over the angel.

They will randomly have 1 or 2 Hit Points, and are one of the few non-boss enemies to not give out experience points.

This is Pit's opponent in the Sacred Training Chamber. This is an iron plate that used to be used for training Palutena's warriors. Watch out! It falls towards Pit.

Monoliths do not release Hearts when destroyed in this game. The swarms are greater in number than the previous installment, but the survival period is also shorter.

Monoliths, now decorated with unique markings, are present in multiple chapters of the game. Rather than being simple training devices this time around, they serve as common enemies and are now affiliated with the Underworld Army. Monoliths try to block Pit's way by moving in a set path. Some Monoliths also serve as mobile platforms for grounded enemies to stand on during some air battles, which were first seen in Pandora's Labyrinth of Deceit. They cannot be hurt by any of Pit's attacks, but their predictable movement patterns make it simple to slip past them without being hit. Occasionally, they may orbit around other enemies, acting as an invulnerable shield for their allies.

Monoliths are flying objects that are said to have once been used in the training of soldiers. They repel all attacks, and their magic properties allow them to ignore gravity and freely transport Underworld troops.