Cragalanche, known in Japan as Rocca (ロッカ, Rokka), is a new character introduced in Kid Icarus: Uprising. He is the first major minion of Viridi that is battled at the end of Chapter 11: Viridi, Goddess of Nature. Being a rock given a soul, Cragalanche can't talk. Despite his heavy weight and size, this powerful rock creature is actually able to move rather quickly and has a variety of attacks that he can use. However, he has a major Achilles' heel in the form of a weak, crystalline structure embedded in his back, which inflicts more damage to Cragalanche if shot at. Nevertheless, the creature can still take a lot of punishment before going down.

Cragalanche is a creature made of purely rock. He has a pair of glowing red eye and a large mouth that doesn't seem to open since it cannot talk. He also has a pair of stubby legs that allow the being to slide across the battlefield. Cragalanche's main weapons are its massive fist-like arms which can also be stretched to reach its foes. Beneath this rocky entity appears to be molten, as the artwork depicts Cragalanche with magma-like cracks forming on the bottom.

Owing mostly to its silent nature, Cragalanche's personality is largely unknown. He is described by Viridi as the strong, silent type and seems incapable of speech. Despite its silence, however, Cragalanche's idol description and trophy description in Smash 4 describes it as incredibly loyal to Viridi, following her orders without question or hesitation and even spent years developing a will of its own so it could serve her better, showing it to be very determined. Its idol description also notes it to have a somewhat flair for the dramatic, often appearing on the front lines of battle by diving from the sky like a meteor. Cragalanche also can be seen as a bit reckless as Viridi states that he was supposed to have that weak spot on its back fixed sometime prior to its battle with Pit.

As his title implies, Cragalanche's main power lies in its immense strength. With his massive strength, Cragalanche can create massive shockwaves by slamming the ground. Cragalanche also holds power over earth, able to manipulate various rocks, even the ones that make up his body, such as enlarging his right hand for a massive punch or turning his left hand into a whip. Cragalanche also seems capable of manipulating magma to a degree, able to toss balls of molten magma as a ranged attack. Despite his massive size, Cragalanche is incredibly swift, capable of leaping high into the air and tunneling beneath the ground at tremendous speeds. Cragalanche's rocky, molten body is extremely strong and can withstand all manner of physical attacks save for the glowing spot on its back. 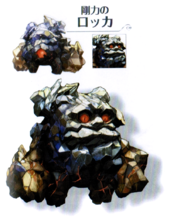 Cragalanche is a boss appearing in the end of the aerial battle in Viridi, Goddess of Nature, where Viridi summons it to fight Pit later on. Cragalanche's rough landing causes the angel to be knocked out of the air, forcing him to begin trekking the Reset Bomb Forest by foot. Pit eventually encounters the rocky monster and defeats him by attacking his glowing rear.

A copy created by Dyntos also appears in Chapter 24: The Three Trials. In this battle, Cragalanche regains the same abilities and weak-spots as before.

A commanding officer in the Forces of Nature. Once a mere boulder with a soul, Cragalanche spent years developing a will of his own. Fiercely loyal to Viridi, he strikes at the front lines of battle like a meteor.

Cragalanche appears as a collectible trophy in the 3DS version of Smash 4.

NA version: Once a mere stone with a soul, Cragalanche has grown into a mighty warrior for the Forces of Nature. You can trust him with your darkest secrets because he is a rock and can't speak. He needs no words to assure Viridi of his loyalty, though—she can see it in his glowing red eyes.

PAL version: Fan of rock and soul? Then Cragalanche is the boulder for you. This stone with a soul spent years developing a will of his own, but it seems he didn't bother developing a voice to go with it. He still managed to swear his loyalty to Viridi, though - he just used his penetrating red glare instead of words.