Phosphora, known in Japan as Ereka (エレカ Ereka), is a new character introduced in Kid Icarus: Uprising. She is a beautiful yet powerful warrior that specializes in electricity-based attacks and can move as fast as lightning. Phosphora is one of Viridi's top commanders due to her incredible power and her ability to create massive storms and tornadoes. She is the boss of Chapter 14: Lightning Battle.

Phosphora is an adolescent commander of Viridi's army, resembling a 16 to 17 year old human girl[1] who is around 170 cm (5'7") tall[2]. She has blonde crescent-shaped hair with red-colored tips that curves at her shoulders, and purple eyes. She wears rather revealing clothing which consists of a pair of white shorts and a small black top covered with two white sashes. She also wears purple boots and arm covers which are covered in black bandages and she has a vine plant around her leg which goes up her shorts and around her body and ends at her arms which give them the appearance of bracelets. Her most noticeable physical feature is her lengthy electric blue scarf.

She behaves much like how she looks, having many characteristics of a stuck-up teenage girl. She can be quite rude to her opponents, as she once mocked Palutena's age. She can also be quite lazy, often passing off comments or events that don't concern her and handling almost everything with a nonchalant attitude. She also has somewhat flirtatious nature, having flirted with Pit on several occasions. Despite these odd quirks, she is a fierce fighter and shows great ferocity in battle. According to Viridi, Phosphora is "free-spirited" and "isn't one to put down roots", likely meaning she is nomadic and goes wherever she pleases.

Similar to Arlon, Phosphora's view on humans is never explicitly stated, but as she is fiercely loyal to Viridi, it is likely she also hates humanity or does not care for them at all.

Regarded as one of Viridi's top commanders, Phosphora has shown to be a powerful warrior despite her young appearance. She has been shown to be able to defeat Thanatos despite not being a god herself and though weakened from the battle, is capable of fighting Pit on relatively equal terms.

Aside from combat purposes, Phosphora can also use her electric powers for other things. Phosphora can electrify the air around her, using it mainly for her skin complexion. Phosphora's electricity can also be used to power devices, such as the Thunder Cloud Temple. While powering the temple, Phosphora has complete control over all its functions and defenses, one of them being a beam of lightning fired from the rod on top of the temple. Her powers also allow her to manipulate the weather to a degree as she can even summon storms and twisters to attack her foes.

Phosphora also possesses the ability to levitate, allowing her to travel across the air at incredible speed, usually by transforming into a bolt of lightning. Phosphora is also capable of teleportation. However, Phosphora is lacking in stamina and tires quickly so she must recharge frequently, especially after a frantic battle. Phosphora is also hinted to be far more intelligent than she appears, and is also implied to possess some degree of technological expertise as according to the Idol description of the Electro Trap, she developed an earlier model in the Thunder Cloud Temple. 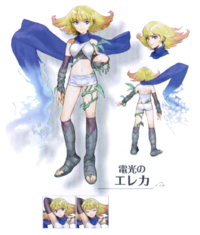 Phosphora first appears in Chapter 14, where she is shown fighting the revived-Thanatos, but manages to quickly defeat him in mid-air. After, she retreats to an abandoned refuge base called the Thunder Cloud Temple to regain her strength. However, Pit breaks through the temples's defenses and defeats her in the boss battle of the chapter. She is revived by Viridi at some point later, and makes another minor appearance in Chapter 20, where she retrieves the Lightning Chariot when Pit and Dark Pit no longer need it.

A beautiful and powerful electricity-based warrior in the Forces of Nature. While victorious in her battle with Thanatos, the wounds Phosphora receives make her weak in the fight with Pit that follows. 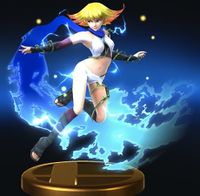 Phosphora's trophy as it appears in the Wii U version

Phosphora appears as an Assist Trophy and regular trophy in both Super Smash Bros. for Nintendo 3DS and Wii U. When summoned as an Assist Trophy, she attacks by flying around and shooting lightning. She will flinch from the attacks by the other fighters but cannot be defeated. She also appears in the Wii U-exclusive mode, Smash Tour, as an item that allows the player to land instantly by tapping down.

Kari Wahlgren, who portrayed Phosphora in Uprising, did not return for this game and was replaced by Stephanie Komure. The Japanese version reuses voice clips of Yuka Komatsu from Uprising.

NA Version: Phosphora is a young, beautiful, fierce commander of the Forces of Nature. She also has control over electricity, letting her move at shockingly high speed. When I write it like that, it sounds like she has everything! Well, I did hear she isn't a great singer...

PAL Version: Some people are just too talented for their own good, and Phosphora is one of those people. A commander of the Forces of Nature, she has speed, strength and the power of electricity on her side. However, everybody has their flaws, and maybe - just maybe - her singing's not that great.

Phosphora reprises her Assist Trophy role in Super Smash Bros. Ultimate, though she is now capable of being defeated like most other Assist Trophies. She also appears as a spirit.