Palutena's Temple is the twentieth chapter in the storyline of Kid Icarus: Uprising. Having gained the Lightning Chariot in the previous chapter, Pit can now break through the barrier defending the legendary temple of Palutena to end her reign of terror.

The aerial portion of this chapter is unique in that Pit rides the Lightning Chariot instead of flying normally to reach the temple, battling waves of Underworld enemies along the way. It’s also rather short due to the chariot’s incredible travel speed, and takes place within a vortex leading straight to the temple. Controlling the Lightning Chariot is similar to typical flight missions, although it takes place from a birds eye perspective, increasing the difficulty of dodging enemy fire as a result. During this time, Viridi explains that Palutena’s sudden aggressive behavior could be the Chaos Kin’s doing, claiming that the creature was freed after Pit destroyed the Lunar Sanctum during Chapter 13. Before she can further elaborate on this monster’s origins, the aerial mission suddenly ends as the Lightning Chariot swiftly crashes through and obliterates the force field surrounding Palutena’s Temple. Pit proceeds to land for battle, while Viridi summons Phosphora to guard the chariot for him. 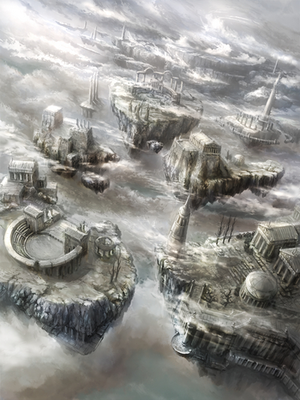 Just as Pit begins his mission, Palutena expresses shock that the angel made it through the barrier. She claims the humans are ungrateful and mocks Pit for trying to defend them, while he tries to convince the goddess to end her newfound tyranny. Throughout this chapter, both Palutena’s Army and the Underworld Army serve as enemies, although there is occasionally infighting amongst the two forces. As Pit makes his way into the temple, he comes across an Exo Tank and a race track that he can use to plow through the Centurions that guard the temple. Along the way, Viridi describes the Chaos Kin and its unique ability to control the soul of its host, likely explaining Palutena’s treacherous behavior. After hearing this fact, Pit concludes that he has no choice but to face Palutena in battle to break the creature’s control over her. It isn’t long before Hades excitedly joins in on the conversation, although the Underworld god admits that even he finds the Chaos Kin to be a major threat. Despite this, he still summons many powerful enemies to irritate Pit along the way, some of which include Erinuses that split in half when attacked, as well as a deadly Tempura Wizard towards the chapter’s end. During the latter part of the mission, Pit has to find a key in a small, maze-like dungeon where some valuable treasures are located. A second Exo Tank is also used to jump across a set of floating islands that lead to the primary structure of the temple. Here, Pit has to battle one final wave of dangerous Centurions and a Juggernaut before proceeding to the courtyard where Palutena awaits him.

The first Intensity Gate lies close to the Exo Tank encountered near the start of the chapter, and requires a difficulty setting of at least 5.0. It acts as a second passageway to the next floating island, but will force Pit to face some Underworld enemies, including a powerful Mega Mussel. Upon beating it, a Treasure Box with a weapon will appear.

The second Gate is located in the dungeon, and requires a high intensity level of 8.0. It contains a single Treasure Box.

The chapter’s Zodiac Chamber is also located in the dungeon within the prison cells. It can only be accessed through an invisible pathway through a wall in the jail cell containing a Skuttler Mage. This Zodiac Chamber contains the Capricorn Club.

As expected, Palutena serves as the boss of this chapter, although it’s actually the invisible Chaos Kin that must be attacked to cause any meaningful damage. Shooting at and defeating the goddess herself will actually penalize Pit by finishing him off and forcing him to restart the battle. Because of this, continuous dodging is a far more necessary measure to survive Palutena’s many attacks. Meanwhile, Viridi explains that the Chaos Kin is actually located high above Palutena, forcing Pit to shoot in that general area until his shots impact the invisible creature. After taking enough hits, the Chaos Kin will drop out of the air and reveal itself as a cyclopean insect. It rarely attacks directly, but Palutena will still fight for the monster while it flies around the arena. On many occasions, the Chaos Kin will actually grab ahold of Palutena and use her as a shield to trick Pit into shooting the goddess instead. Eventually, it will disappear and return above Palutena until it’s shot down again. The Chaos Kin will repeat this pattern until it’s finally defeated.

After taking enough hits, the Chaos Kin will burn up and release its hold on Palutena’s soul. However, just as the goddess is about to reawaken, the monster quickly revives itself and uses its hook-like tail to forcefully remove Palutena’s soul from her body, turning her into stone. The Chaos Kin tears open a dimensional rift leading to the Chaos Vortex, where it quickly retreats with Palutena’s soul. As the passage begins to close, Dark Pit suddenly rides into view on the Lightning Chariot and crashes it into the rift, creating a permanent opening. Seemingly becoming an ally, the dark angel claims that Pit must save Palutena before the Chaos Kin devours her soul, leading straight into the next chapter.