Scorched Feathers is the twenty-second chapter in the main storyline of Kid Icarus: Uprising, and is unique in the fact that it features Dark Pit as a playable character. Due to Dark Pit's ability of unlimited flight, the chapter is made up of only an Aerial Mission and the Boss Battle. It takes place in the Underworld as Dark Pit makes his way to the City of Souls in order to find the Rewind Spring to restore Pit's burnt-off wings. 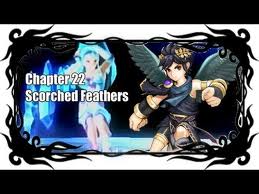 After Pit rescues Palutena's spirit and saves Dark Pit from the Chaos Kin, his wings are revealed to have been nearly completely burnt off and he is left in an unconscious state. Palutena fears that, without his wings, Pit won't be able to survive and she sends Dark Pit to the Underworld in order to find a way to save her captain. Dark Pit reluctantly agrees due to the debt he owes Pit for saving his life, and embarks toward a location known as the City of Souls, home of the Rewind Spring capable of restoring anything dipped in its waters to its previous state. Along the way, Palutena explains her plan and Viridi comments on the Goddess of Light's risky business of cheating death. Palutena acknowledges the nature of her actions but goes along with them.

Once in the City of Souls, Hades joins the conversation, to Dark Pit's annoyance, and it becomes clear that the lord of the Underworld has been using souls to craft his monsters along with letting them be consumed by both himself and a monster residing within the City of Souls. Realizing that Hades has thrown off the balance of the Underworld, Overworld, and heavens, Palutena, Viridi, and Dark Pit all agree that Hades needs to be stopped. But, as Viridi points out, they would need Pit to accomplish that goal. Dark Pit makes his way to the Rewind Spring, but ends up stunned momentarily before he can do anything once there. Pandora emerges from the Spring, being resurrected by the powers that Dark Pit stole from her shortly after his creation. Dark Pit battles her and she retreats back into the Spring, only to come out as Amazon Pandora, her human form.

The Aerial Mission of this chapter is rather long when compared to previous chapters due to the lack of a Ground Mission. Dark Pit fights in the same way Pit does and has access to any and all weapons the player has on hand before the battle begins. He'll encounter many of the usual enemies fought in Aerial battles, but in greater numbers. Dark Pit will receive Recovery Orbs twice during the battle and also must take down a soul-eating monster that appears just after the half-way point of the battle. Hades appears in the background once Dark Pit reaches the City of Souls itself, but he cannot be hit. The Aerial Mission ends once Dark Pit reaches a lone platform that holds the Rewind Spring.

During his travels through the City of Souls, Dark Pit encounters the Soul-Eating Monster, a creature that dwells within the city, devouring leftover souls. Having spotted Dark Pit, the monster now seeks to make the dark angel its next meal. The fight is relatively simple. Dark Pit must first target the sac-like growths on the monster's back, releasing the devoured souls. Once the growths are destroyed, a red light will appear in its maw. Dark Pit must target that to finish it off. The monster only has one attack: firing laser blasts from its growths.

The boss battle of this chapter is broken into two parts: One against Pandora's form seen in Pandora's Labyrinth of Deceit, and the second against a new version of Pandora known as Amazon Pandora. The first part is rather similar to the first fight against her, and she should go down quickly with a combination of melee and ranged attacks depending on the player's fighting style. The second part, however, can be slightly more tricky, as Amazon Pandora has access to a new range of attacks. Two treasure chests will appear randomly throughout the battle, but these should be avoided as they seem to hold nothing and only act as a distraction to the player. Amazon Pandora is capable of teleporting around the area and she sends heart-shaped attacks toward Dark Pit that can reflect his ranged attacks. Dodging these and aiming carefully should lead to a relatively easy victory. On rare occasions, she may blow heart-shaped kisses that weaken Dark Pit if inflicted. However, Amazon Pandora will "play dead" about half way through, pausing as if defeated, but coming back a few seconds later saying, "Just kidding."

It should be noted that Dark Pit cannot cross the water of the Spring and is restricted to its outer rim for his movements.

Dark Pit defeats Pandora once again, this time for good, and Palutena sends an unconscious Pit next to him. Dark Pit quickly dips Pit's tattered wings into the spring and its power restores them, reviving Pit, who jumps up with an ecstatic cheer. But, before he can mention anything to Dark Pit, the latter jumps off the side of the spring, only to find himself unable to fly. Viridi retrieves him, and Palutena extracts Pit back to Skyworld as he tells her how much he missed her.