Magnus and the Dark Lord

Magnus and the Dark Lord is the second chapter in the main storyline of Kid Icarus: Uprising. This part of the plot takes place in an evil castle ruled by Dark Lord Gaol, who is apparently overlooking a war between humans and the Underworld army. In addition, this mission introduces Pit and Palutena to the guest character, Magnus. Although not much is known about Gaol himself, he is likely an important figure of authority in Medusa's army as he commands a number of her troops in addition to his own guards. Magnus, on the other hand, is said to be the strongest of the humans who is looking to defeat the Dark Lord for a money reward. He will serve as a helper character to Pit during most of the ground mission. 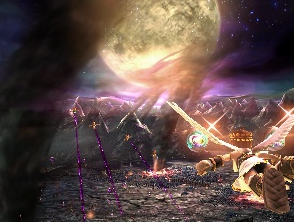 The war between humans and the Underworld Army

In contrast to the beautiful blue skies of the previous chapter, Pit begins this mission in the dangerous and stormy clouds above a dark wasteland. Whirlwinds of air and lightning dominate this area, and many of Medusa's minions attack in full force. The lightning can prove to be fatal towards Pit and will strike across the screen on numerous occasions. Eventually, Palutena will send Pit down through a massive funnel cloud where the Underworld army will give chase. Towards the bottom of the funnel cloud, numerous Gyrazers will begin to fire beams of energy across the screen that must also be avoided. From there, Pit will reach ground level and make his way through a foreboding canyon surrounded by jagged and pointed rocks. Many enemies will glide after Pit during his flight through this area. Along the way, he will also pass over several tainted rivers and waterfalls, and fly through a massive archway. Pit will then proceed into a cavern where he will have to battle multiple Porcuspines standing along the twisted structures within. Upon being taken back outside, Pit will be furiously chased down by a massive Belunka that can spawn other enemies, forcing Pit to fly backwards and fight whilst Palutena guides him through a ravine. The creature can either be defeated by Pit himself, or out flown by him causing it to slam into a stone pillar extending across the ravine. Either way, he will reach an enormous wall at the end of the pass, which must be flown over to get to the castle. At the top, Palutena will lead Pit to an open wasteland lit up by the massive full moon where they will witness a battle between the human race and the forces of the Underworld. The area is littered with fires producing large columns of smoke, and many flying enemies can be seen attacking the ground troops below. At this point, Pit will finally make his way to the ghastly castle of Gaol. 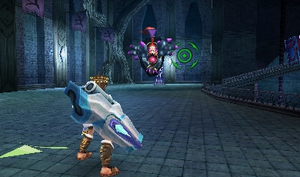 The ground mission of this chapter is much longer than the last, with the Dark Lord's castle being a difficult trek to the throne room. While Medusa herself isn't present in this location, her army is helping to defend the castle. For the first part of the mission, Pit will have to make due on his own and deal with some new enemies, including the variety of Skuttlers that roam the palace. In addition, the castle is guarded by extremely dangerous floating shield-like creatures called Boogities which can launch missiles that home in on Pit. They can only be significantly hurt when they turn around to attack. As Pit makes his way through the castle, he will run into Magnus, who is also fighting off the forces of the Underworld army. While it is currently unknown where Magnus originates from, he is said to be a mercenary fighting alongside the human forces outside of the castle. He makes a deal with Pit and Palutena to work together since they share a common goal. In addition, he expresses anger towards Palutena for allowing the war between humans and monsters to get out of control, claiming that their world is collapsing as a result. As they advance further into the castle, Magnus proves to be a very experienced fighter in comparison to Pit. This is shown when he is able to deduce that the Underworld army set a trap by using a Treasure Chest to lure them in, although Pit was quick to fall for the trick and get them both into trouble. Pit can also lead him to a hot spring, where they exchange a humorous conversation. Despite this, they are both able to make their way to the upper part of the castle where Gaol resides.

This chapter's Zodiac Chamber can be found behind a large tapestry hanging in the hallway at the spiral staircase just before encountering Magnus. Both the wall and the cloth can simply be passed through to reach the chamber. This chamber holds the first Zodiac Weapon, the Sagittarius Bow.

Upon reaching the throne room, Pit and Magnus will both battle Dark Lord Gaol. It has been stated that Gaol was designed to look like an RPG-type final boss character, despite only being the second boss of the game. Gaol has a plethora of attacks, some of which are only used at higher difficulty levels. One attack has him spinning around very fast when he is being overpowered by both Pit and Magnus. Gaol's cape is quite strong and can knock them back with relative ease whenever he uses the spin attack. In addition, he is capable of launching a variety projectiles, using an energy shield to deflect ranged attacks, summoning Skuttlers to assist in battle, and can rapidly move around the room to avoid damage. Another particularly powerful move has the dark lord hovering in the air and unleashing a massive burst of energy, which almost covers the entire room.

While Magnus is invulnerable when fighting off the Underworlds in the castle, he can be knocked out by Gaol and his minions, leaving Pit to defeat the boss by himself. One achievement for Palutena's Treasure Hunt is to defeat Gaol without letting Magnus be defeated.

After taking enough damage, Gaol will finally be defeated. However, in a startling turn of events, it is revealed that the dark lord is actually a young woman beneath the bulky armor. Magnus expresses sorrow at having to defeat Gaol, who was apparently his friend at some point before turning to Medusa's side. Pit is horrified by the prospect that he may have killed a human. Palutena pulls Pit away before he can help, but she assures him that Gaol is still alive.