Dark Pit is the sixth chapter in the storyline of Kid Icarus: Uprising. As its name suggests, Dark Pit stars as the main antagonist of this particular mission. It takes place in a dangerous location plagued by numerous tornadoes, where a mountainous area with ruins serves as the ground-based battlefield below. 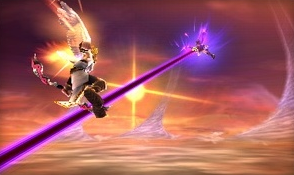 Dark Pit begins the chapter by firing at Pit.

The chapter starts off in the cloudy sky lit by the sunset, where the dark angel strikes Pit from below before he even has a chance to fly. After a quick midair battle, Dark Pit will fly off and descend to the Overworld. Eventually the Underworld Army gets involved in the fray, much to Pit's dismay. Medusa then appears, stating that she likes Dark Pit's style and offers him to be one of the Underworld's most powerful allies. Dark Pit rejects the offer and starts attacking the Underworld Army too. Medusa becomes confused by the rejection, stating that Dark Pit should have been allied with her when created by the Mirror of Truth. Palutena then suggests that the creation of Dark Pit wasn't complete when the Mirror of Truth was shattered in the previous chapter. Despite not being affiliated with the Underworld, Palutena still says that Pit should defeat Dark Pit due to his inherently destructive nature. Pit then flies through varies caverns and trenches, fighting monsters along the way while being harassed by Dark Pit. At one point Dark Pit will grab a stray Zurret and use it to fire projectiles at Pit. Pit can quickly defeat the Zurret from a distance or be forced to get close, depending on the type of weapon. Once the Zurret is defeated, Dark Pit flies away again and lands in some abandoned ruins. Pit then lands into the area, with the Underworld Army also landing there.

The ground portion of the chapter has Pit working his way up a mountainous area, where ruins are abundant. Dark Pit will often land to battle him as well as Underworld troops that might attack.

From the central area which has multiple paths, a single Underworld enemy will wander off towards one of the four paths. That will indicate the location to where Dark Pit is. Dark Pit will be encountered three times, with the first two battles being selected at random out of four possibilities:

Once Dark Pit has been defeated twice, Palutena will set up a Grind Rail in the middle of the ruins for Pit that will lead to the last encounter with Dark Pit, who will also serve as this chapter's boss.

Pit and Dark Pit about to fight.

Now armed with his trademark Silver Bow, Dark Pit serves as the boss at the end of the chapter, and is fought along multiple floating platforms littered with Jump Pads. The layout of the arena makes it easy to lose track of Dark Pit. It's recommended to have a weapon with a strong homing ability. Since the dark angel is capable of unlimited flight, he will often soar across the stage while shooting at Pit, and is also capable of performing a powerful mid-air charge. Dark Pit's strongest attack is to use the bow's special attack and rain down arrows on the arena. The attack is telegraphed by the platform Pit's standing on glowing. After enough damage, Dark Pit will be defeated.

After a heated battle, Pit manages to best his dark counterpart, forcing him to retreat. Pit starts to chase after him, but is stopped and extracted by Palutena, who says that Dark Pit will be dealt with soon enough, but they must focus their attention on the Underworld Army.