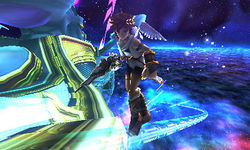 The Grind Rail is a special object introduced in Kid Icarus: Uprising. It looks like a long rail that Pit can jump on and slide along in order to reach new locations. Palutena often creates Grind Rails for Pit to reach otherwise impossible locations. Pit will be fully capable of using his weapons whilst riding a Grind Rail, as it isn't uncommon for enemies to attack and attempt to knock him off. However Pit cannot dodge while on a grind rail, meaning that any hit will connect if not careful. According to Pit, grind rails are gifts from the gods. Grind Rails are very limited to where they can go and can be distorted by outside forces like the Aurum. Grind rails first appeared in Chapter 4: The Reaper's Line of Sight. Grind Rails also appear in Together Mode on the stage Rail Temple.