The Reaper's Line of Sight

The Reaper's Line of Sight is the fourth chapter in the main storyline of Kid Icarus: Uprising. This mission has Pit traversing a new area called the Reaper Fortress. As its name suggests, this area is the home of Medusa's most trusted lookouts, the Reapers, in addition to the dreaded Eggplant Wizards from previous adventures. In order to get to the fortress, Pit must get through a very dangerous ravine infested with Underworld monsters and other traps, all the while avoiding the Reapers that patrol the location. The key to doing this is to stay out of the red light given off by the Reapers' eyes, hence the name of the chapter.

The mission starts with Pit flying through an area clouded by dense pollution and fog. As Palutena guides him, she explains she is trying to locate Pandora's labyrinth but she cannot find it because a force within the Reaper Fortress is obscuring the exact location. She will also warn the angel of the Reapers that he fought during his previous adventures, and how his next target is the very fortress they reside in. This is exceptionally bad news for Pit, as these death-dealing monsters of Medusa were among the most feared enemies of his past. This time, however, their laser eye sight can be seen by the player, and the Reapers will only react if Pit flies directly through their line of sight. In doing so, the activated Reaper will summon multiple Reapettes in the same way it did in the original Kid Icarus. As Pit is finally lowered from cloud cover, he finds himself in an unexpected danger zone as the glowing eyes of hundreds of Reapers dot the surface of the wasteland below, all of them frantically searching for the angel. Upon passing through their spotlight vision, the Reapers begin summoning their flight-capable Reapette counterparts to knock Pit out of the sky. It is only after he makes it past this army of death that Palutena sends him down a massive fissure and through a ravine that leads to the Reaper Fortress. The corridors of the ravine are filled with Underworld troops and Reapers, as well as multiple traps that include dangerous moving walls. The biggest obstacles of course are the Reapers themselves, which stand in various spots along the walls of the ravine. Aside from these hazards, there is also a heavy wind current that forces Pit in a different direction and gets Palutena lost in the process. Once she finds an alternate route, Pit is able to get past the Reapers and make it to the fortress. However, in an unexpected turn of events, the Reaper Fortress suddenly unleashes a heavy barrage of lasers that forces Pit to fly straight through the gateway of the structure.

Pit fleeing from the Reaper.

At the start of the ground mission, an exhausted Pit will wake up on the floor of the Reaper Fortress after experiencing a rough landing during the previous chaos. The fortress itself is rife with many traps and obstacles littering every corner, including spikes that rise out of the ground, guillotines that are built into many of the archways, and dangerous spinning mechanisms that run along a track. The Reaper Fortress also introduces the Grind Rail to players, which can be used to get to new locations, as well as an Eggplant Wizard, the most feared enemy from Kid Icarus who attempts to turn Pit into an eggplant with legs. In addition, the Reapers themselves will be patrolling every corner of the fortress with their line of sight. If Pit falls within this laser sight, the Reaper will begin to pursue while summoning its Reapettes to chase after him. Some new enemies appear that will also utilize the traps around the fortress to their advantage, one of which uses a force of suction to try and pull Pit into a slicing blade. During a later part of the mission, he will have to traverse a polluted river area where more Reapers will be patrolling. Once Pit finally makes it past the numerous horrors of the fortress, he will finally be able to enter its central structure.

The single Intensity Gate of this chapter is reached by taking an elevator and requires a setting of 5.0 or higher. It leads to a grind rail blocked by rocks that must be shot at. A Shelbo and two Gyrazers guard the door that leads to two Treasure Chests containing Hearts, Food, and a weapon. The trip back is made more perilous as two Reapers and a Shrip appear, although a valuable Souflee will also follow you back down the grind rail.

A Zodiac Chamber containing the Taurus Arm is located in the room just beyond where an Eggplant Wizard is fought at the bottom of a glowing pit. A Clubberskull, although restrained, is guarding the area along with a pair of Zuree.

When Pit enters the chamber at the center of the fortress, a normal Reaper will appear and begin panicking upon seeing Pit. As it turns out, this particular Reaper is actually the Great Reaper, which rules over all the others. It will reveal its true form soon after, beginning this challenging boss battle. The Great Reaper has numerous attacks and will use different strategies depending on what level of the arena Pit is standing on. 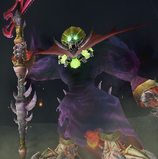 The Great Reaper, just after transformation.

Once Pit causes enough damage to the Great Reaper's weakpoints, a golden light will appear on its forehead. After one more hit to this light, the massive creature will finally collapse, allowing Palutena to locate Pandora's labyrinth in the next chapter.

After dealing the final blow, the Great Reaper lets out a final, dying roar as it collapses to the ground, melting into a dark liquid. Pit comments to Palutena that he really enjoyed their time together though he nearly died. Palutena jokingly comments that he needs to make more friends before extracting him from the fortress.