Specknoses, known in Japan as Hanan Glasses (メガネハナーン Meganehanān), are recurring enemies in the Kid Icarus series. This creature looks like a flying nose with eyes with tentacles that resemble a mustache. It often appears in large groups when attacking.

The Specknose is one of three enemies based on an exaggerated facial feature, the others being Monoeye and Mick. It is an organism resembling a nose wearing spectacles, as its name suggests, giving it a rather bizarre appearance. The creature also has what looks like a mustache at first sight, although it is actually a collection of feelers that it can use for hunting or attacking. In the first Kid Icarus, Specknoses hate sunlight and are territorial, swarming around intruders like bats. In Kid Icarus: Uprising, they adapted to brighter conditions and can now attack in broad daylight without consequence. Additionally, they have displayed a unique ability to carry weapons within their nostrils, such as bombs. 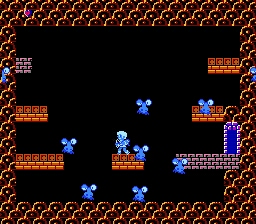 Specknoses are enemies that only appear in Enemy Lairs. They fly in a swarm-like pattern, similar to Ganewmedes and Tros. Unlike most enemies, though, Specknoses are not worth any experience points.

An inhabitant of the enemy's nest. A real coward, it hates brightly lit places. However, it'll jump out real fast once it's spotted Pit. 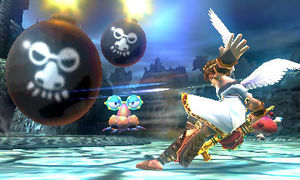 Specknose returns in Kid Icarus: Uprising as a much more challenging enemy than before. Not only is it unusually strong compared to other enemies, but it also has a powerful projectile bomb attack that it launches from both of its nostrils; these bombs have an image of a Specknose imprinted on them. It no longer attacks in large swarms, and can now fight alongside other enemies with brute force. In addition, a Specknose can also fake out Pit by sneezing at him.

Specknose prefers damp climates and, while cowardly by nature, isn't afraid to launch sneeze bombs at the first sight of prey. Its mustache-like growth is actually a set of tentacles. Gross, right?

In NES Remix 2, Specknoses appear as enemies in the Kid Icarus challenge.

Specknose appear as a trophy in Super Smash Bros. for Nintendo 3DS.

Let's get one thing straight here—those are tentacles, not hair, hanging under that oversized nose. Specknoses may look goofy, but you should be wary of the dangerous projectiles they can shoot from their nostrils. Ew! I hope those are just regular bombs...