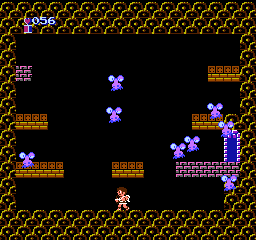 Pit in an Enemy Lair.

Enemy Lairs are chambers scattered in Underworld, Overworld, and Skyworld, though many rooms in a Fortress are functionally similar and Treasure Chambers bear the same layout. Pit will encounter a fierce group of enemies in this chamber. While these rooms are good for collecting Hearts, they can be very dangerous for inexperienced players.

Despite what the manual says, Pit can leave this chamber at any point. He will encounter Specknoses here.