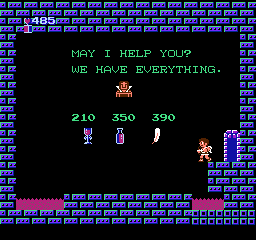 A Store in Kid Icarus.

Stores are locations in Kid Icarus and its sequel Kid Icarus: Of Myths and Monsters. They are common in Angel Land and they sell items to Pit. The merchant in each store will have three things available for purchase, and purchasing an item will cause the shopkeeper to randomly rotate their stock. Merchants not encountered in Fortresses will close their doors as soon as Pit leaves, but Fortress merchants must leave their doors open, making them a great place to stock up on supplies. A Fortress merchant won't appear if Pit's been turned into an Eggplant.

Curiously, merchants encountered outside of Fortresses will force Pit to stop while they speak, whereas Pit retains full movement when dealing with merchants in Fortresses. The following items are commonly encountered in shops:

There are three different configurations:

In a Fortress, merchants also sell:

There are two different configurations: 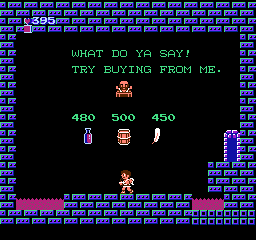 The Black Marketeer sells items stolen by Plutons and Pluton Flies. In addition to weapons (which won't appear unless they've been stolen), Water Barrels are unique finds here. However, everything else is overpriced. Once a single purchase has been made, the Black Marketeer closes up shop.

Merchant's stock can be rotated by pressing down on the control pad.

The following items are commonly encountered in shops:

In a Fortress, merchants also sell:

Unlike the previous game, Pit is unable to bargain with Shopkeepers.

It's possible to haggle with the Black Marketeer by pressing Left+Down+A+B, but failure doubles the prices. Unlike in Kid Icarus where haggling was based on strength, it is based on luck in Of Myths and Monsters with a 50/50 chance the haggling will work. It's also the only place to acquire a Water Barrel and any weapons stolen by a Sticky Talon.

Pit may purchase items from Palutena or Viridi in the Arms Altar. He can also fuse two different weapons to create new ones, and convert unneeded weapons into Hearts. This is not the same as the locations in the previous two games, as it does not appear in the actual story, but has a similar purpose.

In Pandora's Labyrinth of Deceit inside the second Intensity Gate, there is an original 8-bit image of the store.