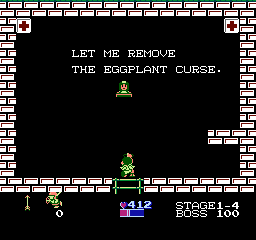 The Nurse removing the Eggplant Curse.

Hospitals are rooms found in Fortresses where Pit can be cured of the Eggplant Curse brought on by the Eggplant Wizard.

In Kid Icarus, there is at least one Hospital in every Fortress, usually far away from a room containing Eggplant Wizards. The Nurse will only appear if Pit is cursed; otherwise, the room will be empty, and will cure Pit for free. The room itself is a basic square shaped area with white tile walls and red crosses in the upper corners.

Hospitals return in Kid Icarus: Of Myths and Monsters, serving the same purpose as in Kid Icarus. The room design is mostly the same, though there are variants that Pit can enter from the side as well.

Hospitals are not present in Kid Icarus: Uprising since now Palutena will remove the Eggplant Curse after a short time. Pit references Hospitals upon the his first encounter with an Eggplant Wizard, joking that he was there so many times they named Hospitals after him ("Hos-PIT-al").

Even though Palutena removes the curse Pit receives, it is revealed in Together Mode that the Fighters are cured from this effect without the need for special help. Once the curse has been dealt with for the first time, any curses to come automatically wear off.