Towns are locations where the humans of Angel Land live. They are made up of buildings that include houses, temples, and in one case, a massive colosseum. Because of Medusa's hatred for the human race, towns serve as primary targets for the Underworld Army, especially in Kid Icarus: Uprising. Certain chapters of the main storyline involve Pit having to save a town from certain destruction by the attacking forces of Medusa, usually by Palutena's request. Although humans are said to live in these locations, none are actually ever seen, although they can be heard calling to Pit and Palutena for help during flight. In fact, it is very likely that the residents are simply hiding within their homes during the attacks.

A small community of humans can be seen in an image from the game's manual. Although it can be assumed that the picture depicts part of a human town or settlement, the only structure actually seen is a lone temple located near a garden.

This installment of the series introduces multiple towns that are featured in The Return of Palutena, Heads of the Hewdraw, The Ring of Chaos, and The War's End.

The Return of Palutena 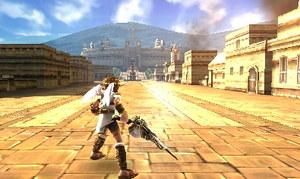 Pit facing the fountain in That First Town.

The town in the first chapter, officially known as That First Town, is located at the center of a lush grassland with many hills, mountains and forested areas. There also appear to be farmlands on the outskirts of the town itself, which can be seen during flight. This human settlement is very flat in appearance and is made up of many smaller buildings, statues, and fountains. The most notable structure of this location is the large colosseum that overlooks the entire area. This landmark appropriately serves as the arena where Twinbellows is fought.


The first town to be attacked by the resurrected Underworld Army. Despite the speed of Medusa's invasion, Pit and Palutena are able to protect the people from any major damage and defeat Twinbellows in their coliseum. 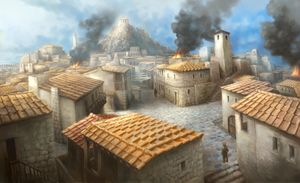 Official artwork of That Burning Town.

The third chapter centers around a somewhat smaller town that lies at the edge of a lake, known officially as That Burning Town. Although it is much more compact, this particular town was constructed as more of a stronghold and is surrounded by a massive wall. In contrast to the wide streets and smaller buildings that made up the previous town, this area is much more crowded and rife with taller structures, conveying a somewhat medieval appearance. It also has a courtyard, a well, and what appears to be a couple of temples that overlook the rest of the town. In addition, there is a path that leads to the lake where the last head of Hewdraw is fought. The destruction the Hewdraw wrought upon this town led Palutena to develop the Juggernaut as a means of defense.

Idol Description
This town is damaged during the Underworld Army's two-pronged assault on the surface world and Skyworld. It is in this city Pit fights the two remaining Hewdraw heads hiding since their last defeat.

The Ring of Chaos

This chapter has Pit traversing a town whose population has been wiped out. Due to his soul being trapped in the Ring of Chaos, the angel explores the town as a Girl, Dog, and finally Magnus, but is only able to leave once he regains his body.

Idol Description
In the three years that Pit is imprisoned in the Ring of Chaos, this once-thriving town becomes a shadow of its former self. Until Pit's return, the stalemate between Viridi, the Underworld, and Palutena prevents all-out war. 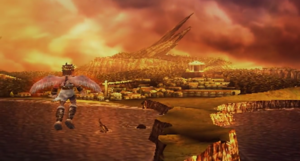 The unnamed town seen in the final chapter.

Another unnamed town can be seen in the final chapter of the story near the end when Pit unleashes the Final Strike to obliterate Hades. After Hades's defeat, humans can be heard cheering for the angelic hero.

Idol Description
The site of the final battle between Pit and Hades. Beginning in the depths of the Underworld and ending in the Overworld, this climactic clash drives our hero to the breaking point. But when the curtain falls, Pit is victorious.