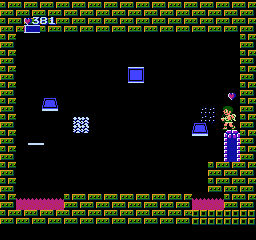 Pit in the Sacred Training Chamber.

The Sacred Training Chamber is a room in Kid Icarus and its sequel Kid Icarus: Of Myths and Monsters. There are rooms where Pit can face "harsh training" in order to prove himself worthy of wielding one of three weapons. Zeus will rain down Monoliths to attack him. Should Pit survive the onslaught and dispatch most of the foes, Zeus will allow him to pick up one of these weapons:

Pit cannot collect the same weapon twice, but he can win them back if they've been stolen by a Pluton, Pluton Fly, or Sticky Talon instead of buying them back from a Black Marketeer.

The Monoliths fall down from the top on the screen and rain downwards in random directions, though they mostly end up near the middle of the platform. Though their swarming may look familiar, they're a bit more erratic than the standard swarming tactic. Pit can stand on the left or right side of the platform (above the door is safest) and prepare to shoot any incoming Monoliths. If Pit leaves the room before the training is finished, Zeus will shout out: "You weakling!"

Monoliths adopt a different swarming pattern here. There isn't a safe spot here, and the challenge is tougher, but shorter.