For a similar enemy in Kid Icarus: Of Myths and Monsters, see Sticky Talon.

Plutons (プルトン Puruton) are enemies in the Kid Icarus series.

Pluton is a hairy fellow in a voluminous robe and carrying a sack of presumably stolen goods. Though armed with fangs, horns, and claws, he's more interested in Pit's belongings than actual harm. Plutons are some of Angel Land's most hated creatures due to their mischievous demeanor and greed. When one strikes, it will not only cause damage, but it will likely result in a humiliating loss of possessions. After doing so, the thief will continuously evade their victim once they have something to show for their troubles. Due to being among the Underworld’s most humanoid beings, they have hands suitable for climbing as well as large feet that grant them exceptional jumping ability. In addition, some Plutons are even equipped with small but functional wings that allow them to fly. They tend to prefer the wide open desert areas as their home, as well as other rural locations of the Overworld.

Plutons are land-bound versions of Pluton Flies commonly found in the Overworld. Their erratic movements are hard to predict as they can jump high or low, fast or slow. This enemy is invincible and Pit must be careful to avoid contact, lest Pluton steal one of his weapons. Anything stolen by a Pluton can be bought back at a Black Marketeer or earned again in a Sacred Training Chamber.

A robbing ogre. Watch out! He's crafty. Touch him and he steals one of your possessions. Pit's arrows don't work against him. He's so stingy. He sells what he's stolen to the black marketeer. 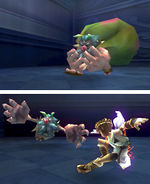 A Pluton in Kid Icarus: Uprising

The Pluton makes a return in Uprising, although this time they can be killed before they get away. They also inflict a small amount of damage when they steal an item, but the amount of damage inflicted is minimal compared to the majority of Pit's foes. If Pit can manage to defeat the Pluton before escaping, he will get his stolen weapon or power back. Their winged cousins do not make an appearance however.

This thief steals items from its victims and tries to dash away before it gets caught. The Underworld Army is willing to overlook these crimes because of Pluton's fighting power--and because evil is sort of what the Underworld Army does.