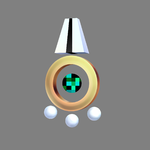 Pips (プコ Puko) are Forces of Nature foes introduced in Kid Icarus: Uprising. They are among the game’s weakest enemies, but have the unique ability to multiply when attacked. Pips resemble gelatinous cells that each have a single leaf sprouting from their tops. They are very lightweight like bubbles, and seem to wander aimlessly through the air. Oddly, despite being such weak enemies, they were among the few Forces of Nature enemies that have Aurum clones. Pips, along with Badoots, are the only Forces of Nature enemies that are never encountered during Land Battles, except for its Aurum copy.

Pip
Pips are single-celled organisms with the ability to divide whenever they're dealt a strong blow, instantly increasing their numbers. They don't exhibit much capacity for thought beyond a simple desire for easy livin'.

Aurum Pip
An Aurum version of Viridi's Pip. The Aurum begin their copying process by emulating their outer appearance of their subjects. And although they can't replicate a Pip's cellular structure, they are able to mimic its dividing ability.