Shildeens (シールダー Shīrudā) are small, bizarre-looking creatures in Kid Icarus: Uprising that seem somewhat alien-like in nature. Despite being Underworld monsters, they don't actually attack or move from their position at all. Instead, they are able to use the halo structure above their heads to produce a force field of energy to protect other enemies from projectile attacks. Despite this shield being quite strong, Pit can potentially break it if he hits it with enough attacks. There are also Cellular Shildeens that are primarily red with green sub-colors. 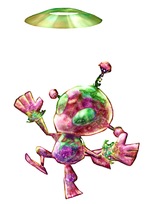 Only one Cellular Shildeen (シ細胞 Shi Saibou) is present in the game. It is found during the land battle of Lord of the Underworld.

Shildeen
Underworld soldiers born to fulfill just one simple task: defending their allies. Nearly all ranged attacks are nullified by their impervious shields. Shildeens have a skill for organization rare among the Underworld Army.

Cellular Shildeen
This cellular version of the Underworld Shildeen guards Hades's Belly from intruders. Although they possess no means of attack, they excel at protecting their allies. In fact, you could call them a cell wall. Get it?