Ganewmedes (ガニュメデ Ganyumede) are recurring enemies in the Kid Icarus series. They are skeletonized Monoeyes that, in Kid Icarus, only make an appearance in the Underworld.

Ganewmedes are said to be a different form of Monoeye, or perhaps even the living skeletal remains of them. They retain their massive single eye, but seemingly evolve a functional jawbone that in some cases can produce spiked projectiles as an attack. Ganewmedes are capable of flight without the need for wings and are able to maneuver themselves through the air using their feelers (or in the case of Uprising, claws). However, the Cyclops Skull variation lacks feelers altogether, despite them still being able to fly. 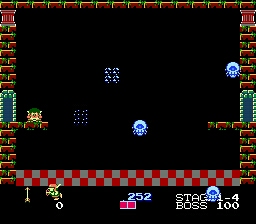 In this game, Ganewmede only appear in the Underworld fortress. They appear in groups of eight and use swarming attack patterns. They are the first enemy encountered in the fortress.

Evolved from a Monoeye. It's a floating life form that builds its nest in fortresses. It stands guard over the fortress with its enormous eye. Watch out for its feelers. They are weapons.

Known as the Cyclops Skull in the game, the Ganewmede uses swooping tactics against Pit. It's not found in the Fortress.

Appear in the air above Pit, flying around in groups.

Ganewmedes are notably stronger than in the previous entries of the series, and now have claws instead of tentacles to move around with. Ganewmedes also now have a unique way of attacking. Rather than trying to shoot Pit down, they will only counterattack if they are hit with a projectile from him. This makes them quite dangerous as the spiked weapons they launch can continuously block Pit's attacks whilst homing in on him. On certain occasions in battle, Ganewmedes may also intentionally crawl into Pit's line of fire to utilize their attack strategy against him. Because of this, melee attacks are the most effective way of dealing with these Underworld monsters. Ganewmede's spike projectiles suspiciously resemble Tros.

Ganewmedes are evolved Monoeyes whose tentacles have been replaced by spiky legs. They respond violently when fired upon, so approach them calmly and use melee attacks to take them out without getting hurt.