Pseudo-Palutena is the false version of Palutena seen during the events of Kid Icarus: Uprising, and was created by Dyntos for one of his trials in Chapter 24: The Three Trials. Unlike the past battle with Palutena, she doesn't have Chaos Kin lingering above her, and must be attacked directly. 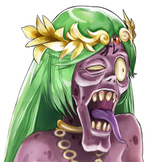 At first, Pseudo-Palutena appears to look the same as Palutena appearance-wise. As the battle progresses, her true face is revealed, being rather vile and disgusting, looking like a comical zombie. Her skin tone is a slight purple, her face being the most dramatic change in her appearance. She has one mostly closed eye, while the other is creepily wide open. She also has a long tongue and the letter "P" written backwards in English games or the kanji "オレ" (Ore meaning "Me") in Japanese games on her forehead.

While the true extent of Pseudo-Palutena's power is never shown, it shows the same powers that Palutena herself uses to attack Pit in Chapter 20, Palutena's Temple. 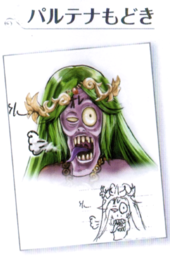 After defeating Magnus and Dark Lord Gaol for the second time, Pit discovers his next opponent is Palutena. After a brief bit of banter with Dyntos, Pit believes she is just another copy created by the god, so he then tries to communicate with Palutena and discovers she is not answering.

Pit reluctantly attacks Palutena, who sounds much more violent then normal. After a few hits, she reveals her true face as "Pseudo-Palutena" and continues the fight. The second phase commences and increases the difficulty of the boss as her array of attacks increases.

After the battle, Palutena "wakes up", and believes she has fallen asleep during Pit's trial. It is revealed during the battle against the Great Sacred Treasure that Dyntos put Palutena to sleep temporarily and created Pseudo-Palutena to make it seem like Pit was fighting the actual goddess herself.

A twisted version of Palutena created by Dyntos as a joke. During the appearance of Pseudo-Palutena, Dyntos put the real goddess to sleep miles away. This amazing feat is evidence that Dyntos's power exceeds even that of Hades.

NA Version: A creation of Dyntos, the god of the forge, this distorted version of Palutena will attack Pit verbally and physically. Destroying her illusion of beauty only makes her more aggressive. Dyntos put the real Paluena to sleep during battle, forcing Pit to tackle this creature alone.

PAL Version: A fake Palutena that Dyntos, god of the forge, made for a laugh. Her face is...just...vile, and she's less than polite to Pit. While Pseudo-Palutena is on the scene, the real Palutena is elsewhere, sleeping soundly. That was Dyntos' work too, actually. He is seriously crafty!