For the boss in Kid Icarus: Uprising, see Great Reaper.

The Reaper (死神 Shinigami) is a recurring enemy in the Kid Icarus series and one of Pit's most recognizable and persistent foes. They have the ability to summon smaller Reapettes (子死神 Koshinigami) into battle. Reapers are said to be the lookouts of the Underworld Army, as well as soul carriers.

The Reaper resembles the standard "Grim Reaper" stereotype, with a skeletal body wrapped in dark purple, tattered, shroud-like cloak and equipped with a scythe. The Reapettes are but smaller versions, armed with sickles. The Reaper itself is human-like, more so than most of the other monsters in Angel Land. While the Reaper is land-bound, the Reapettes are quick and agile fliers. As high-ranking troops of Medusa's army, Reapers are among the more powerful monsters of the Underworld. They are the very definition of death itself, with their large scythes capable of causing even the bravest of warriors to tremble in fear. However, their one weakness lies in their restricted line of sight. Despite being the lookouts of Medusa, Reapers actually cannot detect their targets as well as most other Underworld monsters can. That is, their vision is like that of a spotlight, having extremely far range but a very limited viewing window. When someone does pass through their line of sight, however, they can easily lock onto their new-found target and pursue it vigorously. In addition to this laser vision, Reapers also have telepathic abilities that allow them to summon their smaller Reapettes to battle, which can move much faster and catch up to their target easily.

In the first Kid Icarus, the Reaper is a durable foe that Pit encounters early in his quest. It appears in every non-Fortress area, barring the Palace in the Sky. The Reaper prowls along a flat path, turning around when the path ends. Once every few moments, however, it will suddenly glance behind to see if Pit's trying to sneak up behind it; it will always turn around if attacked in the back. Should the Reaper see Pit, it'll run to the closest spot available on its path and immediately summon four Reapettes. It will keep summoning groups of Reapettes until either it is destroyed, Pit is dead, or Pit moves out of its sight, though any remaining Reapettes will continue to harass the hero until destroyed. Reapers are invulnerable while they are summoning, but not in the 3D Classic version.[citation needed]

Entrusted by Medusa as a lookout. It waves its sickle around when it's spotted Pit and starts chasing him. It calls Reapette by telepathy. 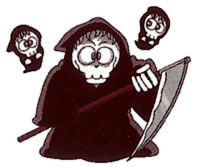 Artwork from Of Myths and Monsters

In Kid Icarus: Of Myths and Monsters, the Reapers act similarly as they do in the previous game.

The Grim Reaper yells and screams, calling Reapettes to attack when he sees Pit.

In Kid Icarus: Uprising, Reapers and Reapettes get a drastic redesign, wearing more of a robe than a cloak and the Reaper's hair will stand up when it spots Pit, but otherwise act relatively the same as they did before in the previous games. If Pit is in the Reaper's "line of sight", which is indicated by a red laser, or attacks them from behind, it will panic and summon two Reapettes at a time as it chases the angel down. If it gets close, the Reaper will attack using its scythe, which does considerable damage. To complicate things further, Reapettes can now paralyze Pit on contact, leaving him unable to outrun or evade the Reaper's attacks. They are first seen in The Reaper's Line of Sight. The music changes to a short 8-bit loop that was from the original Kid Icarus when Reapers are fought. There are also instances where Reapettes appear without a Reaper nearby, such as in the aerial section of The Space-Pirate Ship.

The Great Reaper is a large Reaper which acts as the boss of The Reaper's Line of Sight.

Reapers serve as lookouts for the Underworld Army. When they spot an enemy, they let out a piercing scream that summons their feisty servants, the Reapettes. They also use their giant scythes to reap the souls of their victims.

Reapers and Reapettes appear in the Kid Icarus challenge of NES Remix 2.

Reaper (3DS)
Since he's clearly not planning on doing any gardening, watch out for that scythe! You can tell when one of these has its sights set on you because the music will change and you'll hear a loud scream as it summons its Reapettes. If you always keep your distance and attack from afar, there's no need to fear the Reapers.

Reaper (Wii U)
Since he's clearly not planning on doing any gardening, watch out for that scythe! He loved to scream and summon Reapettes in Kid Icarus: Uprising. In Smash Tour, you'll need to have at least three fighters when you encounter him to earn a Checkpoint Bonus. If you don't bring enough fighters, you'll get launched. Ouch!

In Super Smash Bros. Ultimate, Reaper and Reapette appear as a spirit.