Kid Icarus, known in Japan as Light Mythology: Palutena's Mirror (光神話 パルテナの鏡 Hikari Shinwa Parutena no Kagami), is a video game released for the Famicom in 1986, and the NES in 1987. It features Pit, the main protagonist of the series. Kid Icarus had two successors, Kid Icarus: Of Myths and Monsters, and Kid Icarus: Uprising. Kid Icarus re-released on multiple Nintendo consoles and also has a 3DS remake, 3D Classics: Kid Icarus. Much like Metroid, the game features saving through the use of passwords. It was directed by Satoru Okada.

Kid Icarus was released for the Wii's Virtual Console in 2007, and for the Nintendo Switch's NES Online Service in 2019.[1]

From the game's instruction manual:

Let us go back to the distant past to an age when the Gods and Man lived together in harmony. There once was a kingdom called "Angel Land." This kingdom was ruled by two beautiful goddesses, Palutena who administered light and Medusa who ruled darkness. Palutena lived in the Palace in the Sky and administered light so that man could live in happiness. And bathed in this light man grew food and lived in peace. However, Medusa the goddess of darkness was different. Medusa hated mankind. She took great pleasure in drying up the crops that man took great pains to grow and in turning people into stone statues. In her anger Palutena changed Medusa into an ugly monster and banished her to the deep, dark Underworld. For being changed into this ugly monster and forced to live in the Underworld, Medusa promised to take over the Palace in the Sky where Palutena lived. So great was Medusa's anger that she joined forces with the monsters and evil spirits of the Underworld and Medusa'a[sic] soon began to surpass Palutena's army in strength. Soon a war between Palutena and Medusa began. Medusa led a surprise attack on Palutena's army which could barely fend off the attack.

Palutena's army suffered major losses and was heavily defeated in the battle. What's more, Medusa's army took the Three Sacred Treasures - the Mirror Shield, the Arrow of Light, and the Wings of Pegasus - away from them. Almost all of the warriors in Palutena's army were turned into stone statues and Palutena herself was imprisoned deep in the Palace in the Sky. The peaceful realm of Angel Land came to be inhabited by foul and terrible monsters and was turned into a land of darkness ruled by the wicked Medusa. Locked in the depths in the Palace in the Sky, Palutena's strength was drained to its last. As a last resort, she sought the help of the angel youth Pit who was being held prisoner locked in a deep dungeon in the Underworld. Armed with a bow and arrow brought to him through Palutena's magical strength, Pit attempted an escape from the Underworld. The guard at this time was low in number as Medusa's army had advanced to the Palace in the Sky. Pit succeeded in his escape and set out on his long adventure to rescue Palutena. Yet to defeat Medusa he had to get the Three Sacred Treasures.

Will Pit be able to restore Palutena's light and return it to Angel Land? Only you can answer that question.

Pit's arrows have only a short range and he has a jump height of about three times his height; despite having wings, he cannot fly naturally. He can crouch to avoid enemies and even move while crouching at the same speed. However, there are many platforms, such as ice and clouds, that Pit will fall through should he crouch while standing on them. Being damaged will result in a small amount of knockback and very brief invulnerability (even less so when standing on a damage tile, such as lava). Pit can walk behind certain objects, such as pillars and plants, but this won't protect him from being damaged by an enemy.

Pit starts off with one block of health that contains 7 Hit Points. He can earn more blocks, each of which contain 8 additional HP, upon reaching certain score values:

All weapons require Pit to be at a certain "experience level" in order for them to activate, and have full health for that bar, so a high score is a must. The first weapon (after being obtained) activates when Pit reaches two bars, the second weapon requires three, and the third weapon needs a total of four full health bars to activate. Once activated, a weapon stays active even if Pit should fall below the required health level needed to activate it.

Pit's mission will take him through four worlds, each with four stages culminating in an intimidating Fortress. Here, Pit must defeat the guardian and obtain the Sacred Treasure. In the last area, Pit must fly through the remaining forces of Medusa. After defeating Medusa, Pit will restart the game at level 1-1; however, his score, weapons, hearts, level, strength, and Credit Card debt all remain intact, making the next playthrough much easier (especially since the Sacred Chamber in 1-1 will now likely grant Pit a strength upgrade if he's not already at 5). However, any password for 1-1 will override Pit's status and restart the game as though it were a new one. Therefore, players should proceed to 1-2 before acquiring the password.

Pit's quest will allow him to explore many chambers. Once Pit leaves a room it's forever sealed, with the exception of Fortress rooms. They include:

Fortress items disappear when Pit leaves the Fortress that they were found in. 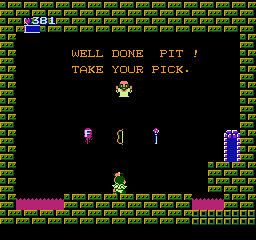 Pit's weapons do not necessarily activate when obtained; they require him to reach a certain level of health before they'll activate automatically (which in turn requires him to increase his level; see the Gameplay section above). Pit must reach 15 HP to activate the first weapon he picks up. The second weapon requires 23 Hit Points, the third demands 31.

Pit will encounter a vast variety of monsters in his quest, including Fortress guardians protecting the Sacred Casket.

The universe of Kid Icarus borrows heavily from Greco-Roman mythology, as is evidenced by the items, monsters, and characters within. The story itself is (very) loosely based on the legend of Perseus, a human youth who made the dangerous boast of being able to kill Medusa. Aided by Athena, and a few fetch-quests to obtain powerful magic items later (Mirror Shield included), he finally slew her.

The appellation "Icarus" is from a story of a separate youth, the titular son of the famous inventor and genius Daedalus. While kept prisoner, Daedalus created set of human-sized wings, crafted from wooden straps with bird feathers stuck to the frame by wax. Icarus borrowed the wing frame and flew high into the sky, over the seas. Though Daedalus warned his son not to fly too high to the sun, Icarus disobeyed him and kept flying higher. The intense heat from the sun melted the wax binding the feathers to the frame and Icarus fell, dashing himself upon the ocean and dying instantly.

Kid Icarus was released in the same month as Metroid in North America and functions on the same game engine. Kid Icarus even includes an enemy from Metroid, a Komayto which is said to have come from another planet.