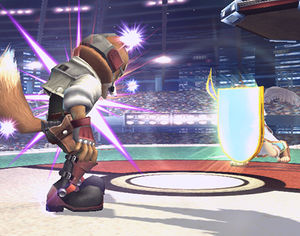 In Brawl reflecting one of Fox's lasers

The Mirror Shield is one of the Three Sacred Treasures in Kid Icarus, kept in a Sacred Casket and guarded in a Fortress. Pit must recover this artifact and, combined with the Wings of Pegasus and Arrow of Light, take out Medusa in the Palace in the Sky. It appears as his down special move in Super Smash Bros. Brawl.

The shield itself possesses a mirrored cover and protects Pit like a tower shield. Without this, Pit would be turned to stone by Medusa by merely looking at her, as the shield protects against her petrifying glance. Pit will lower his shield to fire the Arrow of Light, so he must keep moving to avoid Medusa's petrifying glare.

The Mirror Shield returns with the similar design used in Brawl. Although it initially appears to have a strictly cosmetic effect, it can actually negate all projectile and melee attacks if Pit maneuvers himself so the attacks strike the shield instead of him.

Pit's down special move that reflects any projectile, as well as protects Pit against any move—the Mirror Shield can fully protect him from damage when used properly. However, the shield will only protect Pit's front, leaving him vulnerable from behind. The Mirror Shield also never breaks unlike other reflectors, but Pit will stow the item away after approximately fifteen seconds. It can also be tilted up if necessary.