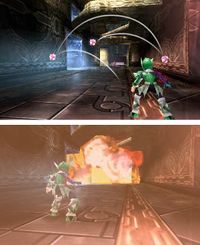 Demonstration of the Bouncy Bomb

Icon of the Bouncy Bomb

A Bouncy Bomb is a new item that appears in Kid Icarus: Uprising. It is a small bomb covered with small, round lumps. When thrown, the Bouncy Bomb bounces off of surfaces until it bounces off three times or hits an enemy, upon which it will explode and damage anything in the blast radius. Bouncy Bombs are usually out in the open or found in Treasure Boxes. They appear in Solo and Together Modes, though only in the ground segments of Solo Mode.

"This bomb slowly bounces off surfaces. While it's unpredictable, a Bouncy Bomb keeps going after hitting walls, making it effective in closed-in spaces. Try sending it around blind corners as a precaution!"