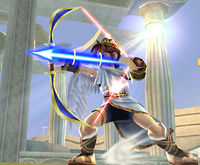 The Arrow of Light (ライトアロー Raito Arō) is the ultimate weapon for Pit, being one of the Three Sacred Treasures. It's an unstoppable beam of light that pierces through everything in its way, enemy or object alike. The downside is that Pit can only launch one arrow at a time; he cannot fire again until the previous arrow has disappeared.

This mighty weapon is sealed in a Sacred Casket until Pit assembles all three treasures. In the Palace in the Sky, Pit can blaze his way through Medusa's remaining troops. Its strength is equal to Pit's strength. Even if Pit does not have enough health to use the Sacred Bow, the Arrow of Light will still be able to reach any area of the screen.

The Arrow of Light is functionally identical to its first incarnation.

The Arrows of Light return with a brand new design. These holy arrows are fired from an elegant, golden bow, decorated with levitating rays of light. In addition to their peerless homing ability and rate of fire, they are the only weapons capable of defeating Ornes. However, they are surprisingly weak when used during higher Intensities, making the use of a different weapon advisable for high-Intensity playthroughs.

Arrows of Light could have served as the inspiration for Pit's neutral special move in Super Smash Bros. Brawl, Palutena's Arrow.

The Arrows of Light appear as part of Pit's Final Smash, replacing Palutena's Army from Brawl. Pit uses the Arrow of Light as his main attack, firing off several arrows of light, followed by releasing large beams of light that encompass the stage.