Super Smash Bros. Brawl, known in Japan as Dairantou Smash Brothers X (大乱闘スマッシュブラザーズ Dairantō Sumasshu Burazāzu Ekkusu), often abbreviated as "SSBB" or "Brawl", is the third installment in the Super Smash Bros. series published by Nintendo and developed by HAL Laboratory. This game features Pit as a playable character, a first since the November 1991 release of Kid Icarus: Of Myths and Monsters.

Pit is a balanced, medium-weight character in the game. His attacks generally have low knockback, leaving his strategy to revolve around range and hit-and-run tactics, with a decent focus on defense and high recovery. Many of his moves are based off of the Three Sacred Treasures. 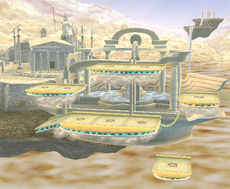 Super Smash Bros. Brawl features one stage drawn from the Kid Icarus franchise, this being Skyworld. The stage consists of several clouds holding destructible stone platforms on top of them. In the background, a large statue of Palutena is featured.

The game's story mode, The Subspace Emissary also features a level called Skyworld, as well as another level named the Sea of Clouds, both of which draw inspiration from the Kid Icarus series.

Note some of these tracks are variations of the original themes and not the themes themselves.

Role in The Subspace Emissary

In the game's story mode, The Subspace Emissary, Pit is a playable character. Pit first appears viewing a match between Mario and Kirby from Skyworld. Once Primids appear and attack the stadium, Palutena appears and gives Pit the Palutena Bow, and then Pit sets off to rescue those that were attacked and deal with the Subspace Army. He soon encounters Mario and joins with him to defeat the Subspace Army.

Once everyone journeys into Subspace, they are attacked by Tabuu and are turned into Trophies. Pit must then be rescued by Luigi, Ness, and King Dedede in order to be playable again.